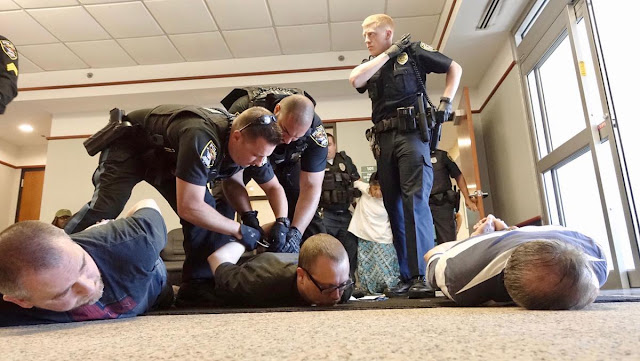 Two Catholic priests, along with 2 pro-life leaders were arrested on Saturday, July 13, 2019 inside an abortion facility in New Jersey.

In total the police arrested four pro-life advocates amid a "Red Rose Rescue": Father Fidelis Moscinski, Father Dave Nix, William Goodman and another unnamed individual. This took place in the morning at the Garden State Gynecology, in Morristown, New Jersey.
They gave each mother a red rose with a card attached. On it was the message: “You were made to love and to be loved… your goodness is greater than the difficulties of your situation. Circumstances in life change. A new life, however tiny, brings the promise of unrepeatable joy.” It also included the phone numbers of local pregnancy help centers.
According to the "Red Rose Rescue" Facebook page: After entering a abortion clinic peacefully and sitting down and talking quietly, offered assistance respectfully. 2 Catholic priests and 2 pro-life leaders were arrested by police. They sang Silently Night to carol the babies, mothers, fathers, mill workers, and police. They were involved in what they call "an emergency rescue operation to directly defend lives in the most immediate mortal danger, and rescue according to the command of Proverbs 24:11."
Police charged the two priests and other two pro-life advocates with trespassing.

Some pro-life advocates refuse to leave believing that refusing to leave is an act of solidarity with the unborn babies who are scheduled for abortions.

* According to the Pro-Life "Red Rose Rescue" Facebook page:
Every Red Rose Rescuer must be committed to non-violence or they may not be part of the organization. Violence has absolutely no place in our efforts, or any efforts, to help pregnant mothers and their babies. This is why we peacefully enter the facilities-- to prevent the horrific violence of abortion through our peaceful witness of non-violent solidarity. We confront the violence of abortion with respect, dignity, mercy and peace.
Second of all, each Red Rose Rescuers is forbidden to harass or intimidate anyone... ever. Such actions are completely inimical to our mission to share Christ's love and truth in a humane way with those tempted to kill innocent children in the womb. We are always gentle, compassionate, caring, soft-spoken, empathetic and wholly non-threatening.

When police officers arrived, some of the pro-life advocates were talking with women, while others were praying quietly and singing hymns, according to the pro-life group.


About a dozen other pro-lifers stood outside witnessing during the "rescue".


There have been more than a dozen similar demonstrations in the United States since 2017, according to the pro-life "Red Rose Rescue" group.