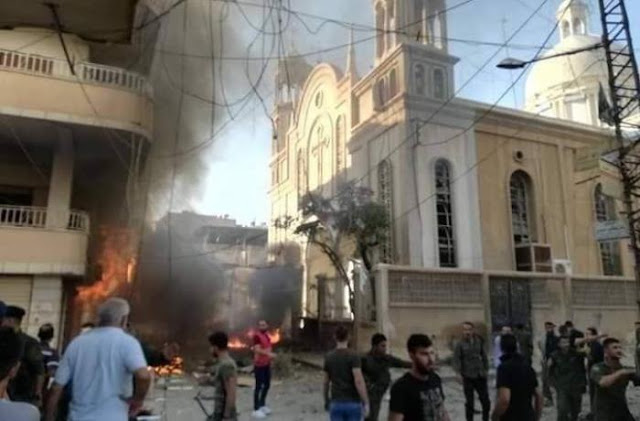 Qamishli: car bomb hits the church of the Virgin Mary, at least 12 wounded
The explosion caused serious damage to buildings and cars in the area, without causing victims.  Al-Wasta is a Christian neighborhood in an area with a Kurdish majority.  Syrian Orthodox Patriarch: attack that creates "anxiety and disorder".  Christians "must remain" and not be intimidated.  Authors are still unknown.


Qamishli (AsiaNews) - The toll from an attack that struck the Church of the Virgin Mary in Qamishli, northwest Syria, in an area with a Kurdish majority disputed with the central government of Damascusis of at least 12 wounded.

So far there are no official claims for the attack or victims - despite early reports of deaths - but only serious material damage to the cars, buildings and the place of worship.

Local sources interviewed by AsiaNews say that the explosion, triggered by a car packed with explosives, occurred shortly after six in the afternoon local time.  The attack targeted the neighborhood of al-Wasta, with a Christian majority, where the Syro-Orthodox church stands and, not far away, there is also the Armenian one.

According to a local Christian, who asks for anonymity, the toll could have been much more serious if the attackers had not miscalculated the ending time pf vespers at 5.30.  A few minutes later, he warns, it would have been "a massacre" with several dozen deaths.

Suspicions are concentrated around extremist groups, including local cells or lone wolves of the Islamic State (IS, ex Isis), still active in the area.  However, there are no official claims or obvious traces that could lead to a particular group.  The explosion caused serious material damage, but there would be no casualties and even the wounded are out of danger.

In a statement released to AsiaNews, the Syrian-Orthodox patriarchate of Antioch and the whole East condemned the attack, which "triggered an atmosphere of anxiety and disorder".  Nevertheless, the patriarch Mar Ignatius Efrem recalls that Christians "must remain" in their land of origin and must not be intimidated.  The priests and the faithful, the communiqué continues, "who were in the church are all well", as well as "the inhabitants of Qamishli";  the hope, he concludes, is a "speedy recovery" for those injured and "a return to peace and security in Syria in the near future".

The attack on the church is not an isolated event, because in the north-western area of ​​the country - controlled by the Kurds, long supported by Washington - yesterday there were three different attacks: the first occurred near a  checkpoint in Afrin (dispute with the Turks) and killed 13 people, including 8 civilians, and injured 35 others. The third attack took place in the center of Hassaké, where a motorcycle exploded with explosives  , this time without causing victims
FULL TEXT release from Asia News IT
Posted by Jesus Caritas Est at 9:44 AM