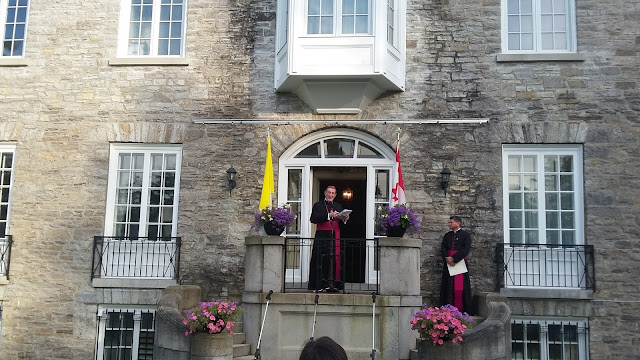 Archbishop Luigi Bonazzi, the Apostolic Nuncio to Canada, invited over 200 people to a celebration honoring the election of Pope Francis. The generous Archbishop held the gathering on the beautiful grounds of the nunciature in Rockcliffe Park of Ottawa. A choir sang the national anthem of the Vatican. In his opening welcome the nuncio spoke in both official languages of Canada, French and English, thanking the guests for honoring the Pope with their presence. Speaking of a possible Papal visit to Canada he said, “With deep conviction I answer ‘yes’ although I must immediately add that as for the time and exact date, only the Lord knows,” he said.
Guests included members of different Embassies, bishops, clerics, religious and friends; notable among the guests was MP Pierre Lemieux, Deacon Andrew Bennett (Cardus, pictured below) and Archbishop Predergast of Ottawa. The June 27 reception  honored the sixth anniversary of Pope Francis’ election.
Archbishop Bonazzi explained, “Pope Francis sees the Church as a community of men and women who live for others, who care for those in need, for those who are injured, for those who find themselves on the margins of life,” ,“But in order to heal others, we need to be cared for and healed ourselves.” 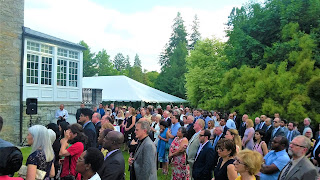 The Nuncio openly discussed the abuse crisis in the church saying, “Precisely to help and ensure the good health of the Church, which in recent times has found itself sick and wounded by the serious scandals of sexual abuse, Pope Francis is leading a serious and ongoing process of healing and reconciliation, a process which had one of its most significant moments in the convocation last February, of bishops and religious Superiors from around the world on the Protection of Minors in the Church.” 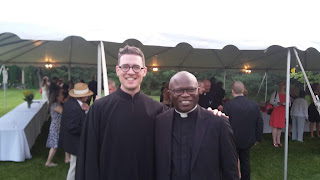 “Yes, Pope Francis is at the forefront in leading this three-dimensional battle of life which consists in doing good, responding to evil with good and, with God’s help, bringing good from evil,” the nuncio said.

“In this context, I am very pleased to note that the protection of minors has been a major priority of the Church in Canada since the 1980s,” he said. “The historical engagement of the Canadian Conference of Catholic Bishops in the area of prevention remains relevant and valuable to this day.”

“Their recent document, Protecting Minors from Sexual Abuse: A Call to the Catholic Faithful in Canada for Healing, Reconciliation, and Transformation, is a most valuable resource for Catholic Bishops and Religious Superiors in Canada and around the world,” he said. “It was held up as a best practice at the important meeting at the Vatican last February.”

Archbishop Bonazzi also remembered Pope Francis’ historic February visit to the United Arab Emirates and his signing, along with the Great Imam of Al-Azhar, Ahmad Al-Tayyib, of the document “The Human Fraternity for World Peace and Common Coexistence.”
Thus, promoting peace with people of the Islamic faith.
Concluding his speech the Nuncio highlighted the Canadian  Jean Vanier, founder of L’Arche, who died in May.

“Jean’s visit to a small village in France with an institution that housed men with mental disabilities prompted him to learn more about them and the sufferings they endured,” he said. “Thus began the journey of L’Arche, a place of welcome where people with these and other disabilities, and their caregivers, journey through life together.”

Vanier, as co-founder of the movement Foi et Lumière, helped “some with disabilities and others without, that has grown to nearly 1,500 communities in 81 countries on five continents,” he said.

“Let us give thanks to God for Jean Vanier, who taught the world some powerful lessons about goodness, mercy, fraternity and joy,” the nuncio exhorted. “May we learn from his love of the poor, his care for the little ones, his sense of hospitality and his goodness. He taught the world a powerful lesson. And he was a Canadian.”
With some information from CatholicRegister.org
Posted by Jesus Caritas Est at 9:35 AM