Historic Moment : Pope Paul VI 1st Blessings to Men on the Moon in 1969 and Receives a Piece of the Moon as a Gift! 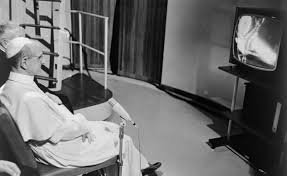 As millions of men, women and children did across the world on the night of 20 July 1969, Pope Paul VI spent his time glued to the television to watch Neil Armstrong as he became the first man ever to land, and then to walk, on the moon.

50 years after that historic event, scientists agree humanity will have to take another giant step forward to try to equal the achievement and legacy of Apollo 11 and its crew.
The powerful significance of the event was not lost on the Pope of the time who became the first Roman Pontiff to send a message hurtling through space in which he blessed the three astronauts who had just landed on the moon, before sending a congratulatory telegramme to then US President, Richard Nixon.
But as Veronica Scarisbrick notes in this picture in sound, for Pope Paul VI, the moonwalk was a recognition of the “greatness of God's handiwork”, and the moon “the poetic pale lamp of our nights and dreams”.

“Pope Paul VI is speaking to you astronauts: Honor, greetings and blessings to you, conquerors of the moon.”

For Pope Paul VI,the moonwalk was a recognition of the greatness of God’s handiwork.

The moon itself, he personified poetically as the pale lamp of our nights:

“Pale lamp of our nights and our dreams bring to her with your living presence the voice of the Spirit”.

As the tiny lunar module neared the surface of the moon, scouring the landscape for a safe stretch to touch down on, all over the world people scoured the fuzzy images from space on their television screens, anxious to see what would happen.

Pope Paul was no exception. He too watched the landing from his summer residence in Castel Gandolfo which housed the Vatican Observatory.

And as Neil Armstrong stepped down on the powdery surface of the moon, Pope Paul VI clapped his hands and said: “We are close to you with our good wishes and with our prayers, together the whole Catholic Church”.

Often caught peering at lunar landscapes through the telescope at the Vatican Observatory, Paul VI had always shown a special interest in space travel.

In the very first speech of his pontificate, he said that with the blessing of God, it had opened up new era for humanity, and on a later occasion he had given an astronaut a specially engraved bronze plaque to be laid on the surface of the moon, with the words from a Psalm: “O Lord our God, how great your name throughout the earth”.

In return, he got a piece of the moon, which today is still kept at Castel Gandolfo.
FULL TEXT Release from VaticanNews.va - Image source: Google Images
Posted by Jesus Caritas Est at 3:05 PM