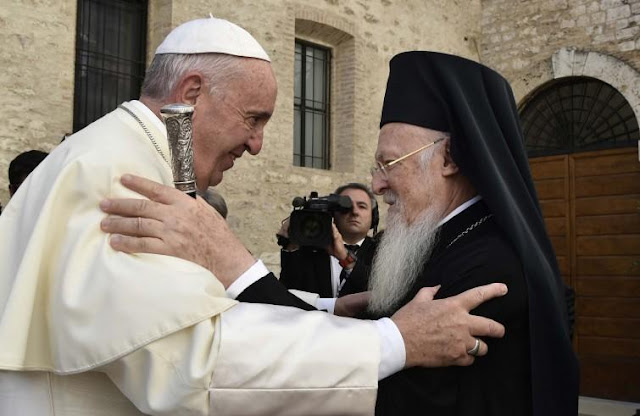 The Pontifical Mass for St Peter & St Paul's Solemnity in St Peter's Basilica, celebrated on 29th June by Pope Francis, this year again, as in previous years, was attended by a delegation of the Ecumenical Patriarchate of Constantinople.

After the Mass, Pope Francis invited Archbishop Job of Telmessos, the official representative of Ecumenical Patriarch Bartholomew I and co-chair of the International Commission for Theological Dialogue between the Roman Catholic and the Orthodox Church,  to pray with him in front of the  tomb of St. Peter. Together, the two men descended to the Confessio, which lies just below the Pope's altar under the canopy of Bernini.

After praying together, Francis said to Job, "I have another gift for the Church in Constantinople." He asked him to follow him. Together, the men went to the Apostolic Palace, went up to the third floor, entered the now vacant apartment of the Popes. There, Francis led the Orthodox bishop to his chapel built by Paul VI. Pope Francis brought out a bronze shrine which contains nine pieces of bone. The shrine contains pieces of the most important relic of St. Peter's Basilica: "the bones found in the Vatican Basilica, of St. Peter the Apostle."

"You know, Pope Paul VI. He wanted to keep some of the relics of St. Peter that had just been found under St. Peter's Basilica in his private chapel, "Francis explained to representative:" Last night, in prayer, this thought came to my mind: I no longer live in it Apostolic Palace, I never use this chapel, I do not celebrate Holy Mass here and we have the relics of St. Peter in the basilica. So it's better that these relics are kept in Constantinople. They are my gift to the Church of Constantinople. Please take this reliquary and give it to my brother, Patriarch Bartholomew. This gift is not from me, it's a gift from God. "