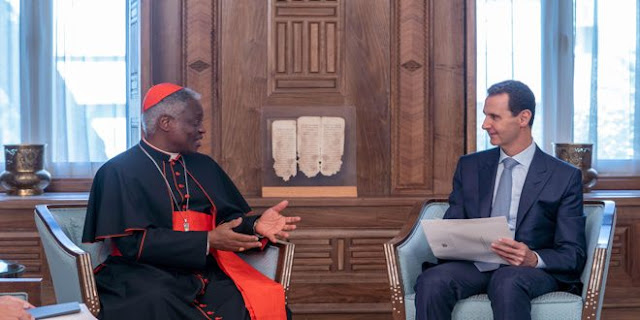 Card. Parolin: “Pope asking Assad for concrete initiatives on behalf of Syrian population”
Acts of war and bombardments against defenseless civilians continue to occur in Syria. With dozens of health facilities destroyed or closed in Idlib Province, Pope Francis asks Cardinal Turkson to deliver a letter to the Syrian President.
By Andrea Tornielli

Protection of civilian life, an end to the humanitarian catastrophe in Idlib Province, concrete initiatives for a safe return of displaced persons, the release of detainees and access for families to information regarding their loved ones, and humane conditions for political prisoners. All this and a renewed appeal for a resumption of dialogue and negotiations with the involvement of the international community.

These are the concerns and concrete requests contained in a letter that Pope Francis addressed to Syrian President Bashar Hafez al-Assad. The Pope’s letter, dated 28 June 2019, was delivered only hours ago by Cardinal Peter Kodwo Appiah Turkson, Prefect of the Dicastery for Promoting Integral Human Development.

The Cardinal, bearing the missive written in English, was accompanied by Fr. Nicola Riccardi, O.F.M., Undersecretary of the Dicastery for Promoting Integral Human Development, and by Cardinal Mario Zenari, the Apostolic Nuncio to Syria.

Cardinal Secretary of State Pietro Parolin, the Pope’s primary collaborator, spoke to Vatican News about the content and purpose of the letter.

Q: Your Eminence, why did the Pope decide to write to President Assad?

Cardinal Parolin: “At the heart of this new initiative lies Pope Francis’ and the Holy See’s concern for the emergency humanitarian situation in Syria, in particular in Idlib Province. More than 3 million people live in the area, of which 1.3 million are internally displaced, forced by the long conflict in Syria to find refuge in the area, which last year was declared demilitarized. The recent military offensive has added to the already extreme living conditions they had to endure in the camps, forcing many of them to flee. The Pope follows with apprehension and great sorrow the tragic fate of the civilian population, children in particular, caught up in the bloody fighting. Unfortunately, the war grinds on – it has not ended: the bombings continue, various health facilities have been destroyed in that area, while many others have had to suspend their activities, either completely or partially.”

Q: What is the Pope asking of President Assad in the letter that was delivered?

“Pope Francis renews his appeal for the protection of civilian life and the preservation of the main infrastructures, such as schools, hospitals, and health facilities. What is happening is intolerable and inhuman. The Holy Father asks the President to do everything possible to put an end to this humanitarian catastrophe, in order to protect the defenseless population, especially those who are most vulnerable, in respect for international humanitarian law”.

Q: From what you have said, it seems that the intent of the papal initiative is not “political”. Is that true?

“Yes, it is. As I have already explained, the concern is humanitarian-based. The Pope continues to pray that Syria may regain a climate of fraternity after these long years of war, and that reconciliation may prevail over division and hatred. In his letter, the Holy Father uses the word ‘reconciliation’ three times: this is his objective, for the good of that country and its defenseless population. The Pope encourages President Bashar al-Assad to carry out significant gestures in this urgent process of reconciliation, and he offers concrete examples. He cites, for example, creating the conditions needed for the safe return of exiles and internally displaced persons, and for all those who wish to return to the country after having been forced to leave. He also mentions the release of prisoners and the access of families to information about their loved ones.”

Q: Another dramatic issue is that of political prisoners. Does the Pope mention this topic?

“Yes, Pope Francis is particularly concerned about the situation of political prisoners, to whom – he affirms –humane conditions cannot be denied. In March 2018, the Independent International Commission of Inquiry on the Syrian Arab Republic published a report on this issue, saying there are tens of thousands of people who have been arbitrarily detained. At times – in unofficial prisons and in unknown places – they are allegedly subjected to various forms of torture without any legal assistance or contact with their families. The report notes that, unfortunately, many of them die in prison, while others are summarily executed.”

Q: What then is the purpose of this new initiative by Francis?

“The Holy See has always insisted on the need to seek an appropriate political solution to end the conflict, overcoming partisan interests. And this must be done using the instruments of diplomacy, dialogue, and negotiation, along with the assistance of the international community. We have had to learn once again that war generates war and violence incites violence – as the Pope has said many times, and as he repeats also in this letter. Unfortunately, we are concerned about the stalemate in the negotiation process – especially that seen in Geneva – for a political solution to the crisis. That is why, in the letter sent to President Assad, the Holy Father encourages him to show good will and to work towards finding viable solutions, putting an end to a conflict which has lasted far too long and which has led to the loss of numerous innocent lives”.
FULL TEXT Source: Vatican News.va - Image source: Google Images of Card. Turkson with Assad
Posted by Jesus Caritas Est at 9:08 AM