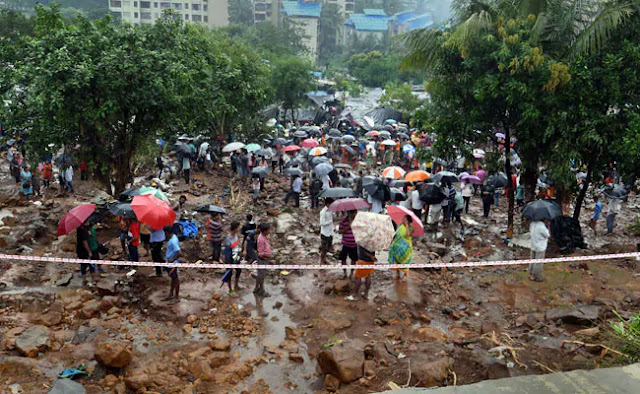 22 die in Mumbai wall collapse. St. Jude's Church organizes relief efforts (Videos and photos)
by Nirmala Carvalho
A wall has collapsed in the Malad East neighborhood.  The church is right next to the place of the tragedy.  Catholics throughout the archdiocese have offered their help, both economically and in the distribution of basic necessities.


Mumbai (AsiaNews) - At least 22 people were killed and 50 wounded in the collapse of a wall in Malad East, a northern suburb of Mumbai.

The collapse occurred yesterday and is due to the incessant rains that hit the Indian megalopolis for two days.

Speaking to AsiaNews Fr. Warner D’Souza, who leads the nearby church of St. Jude, says: “We mobilized immediately.  I received about 300-400 text messages from the faithful who offered their willingness to help and care for the wounded ".

The last victim of the collapse, a 12-year-old girl, was pulled out lifeless from under the rubble this morning.

The image of the city in these days is distorted: flooded streets, suspended trains, interrupted communications.  In all, the rains have caused thirty victims.  Today there are thunderstorms, which should diminish in the evening.

Fr. D’Souza reports that “the church of St. Jude is right next to the collapsed wall.  We immediately realized what had happened and all the parishioners, about 800 people, immediately set to work.  We rescued the survivors, transported the injured to the hospital and distributed money directly to the people.  The response of the faithful was wonderful ”.

All the priests of the archdiocese of Mumbai, he continues, "have sent me money individually, as well as offering economic support through their churches.  I received phone calls from Catholics from all over the archdiocese, willing to give their support. "

In the minutes following the tragedy the priest succeeded in alerting also the neighboring parish, Our Lady of Lourdes, "who came to the rescue with youth and prayer groups".  This morning, he concludes, "around half past five, we went back to distributing food, umbrellas, flashlights and raincoats.  Then we will continue with the collection of foodstuffs."
Full Text from Asia News IT - Death Toll edited from Update by Ndtv