Wow Kidnapped Archbishop says "I spent the whole night reciting the rosary" and was Released the Next Day! 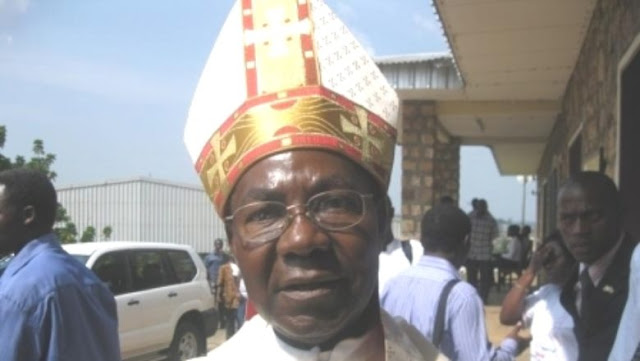 AFRICA/CAMEROON - "I spent the whole night reciting the rosary", says the Archbishop of Bamenda kidnapped by separatists
Saturday, 6 July 2019  Yaoundé (Agenzia Fides)
- "I told them they cannot achieve their goals by practicing evil, because evil can only lead to evil", said His Exc. Mgr. Cornelius Fontem in an interview on Cameroon's national television Esua, Archbishop of Bamenda, in the north-west of Cameroon, who had been kidnapped on June 25 and released the next day. Mgr. Cornelius Fontem Esua was returning from a pastoral tour for a few days when his car was blocked by a group of secessionist rebels (amba-boys), near the village of Belo-Njikwe. Bishop Esua tried to explain to the separatists that he had to return to the archdiocese after 5 days of absence and tried to physically remove the barrier placed on the road, as he had done with four other rebel checkpoints. "Suddenly a group of secessionists on motorbikes came screaming and started to threaten. They wanted to brutalize my driver. I told them not to touch him and that if they wanted to take it out on someone, they would have to take it out on me", the Archbishop said, who was kidnapped but said that he was treated well. "I spent the whole night reciting the Rosary", said Archbishop Esua, who was released the next day after having had a telephone conversation with the "general" who led the rebel group. "I told him that they cannot achieve their goals by practicing evil, because evil can only lead to evil. And God will not be able to hear their prayers if they continue to do evil, because we must not do to others what we do not want to be done to us", said the Archbishop. Since 2016 the north-west and south-west of Cameroon are in the throes of a secessionist crisis born from the request of the local English-speaking populations to be able to use the English language instead of the French language at school and in courts. The protest degenerated into an independence movement that clashes with the regular army. So far, attempts to resolve the crisis have failed. (L.M.) (Agenzia Fides, 6/7/2019)
Posted by Jesus Caritas Est at 11:32 AM

how do i register

God is awesome. Glory to God through Jesus Christ his son. Amen

Do not be afraid,I am with you!Iam your God,let nothing terrrify you.I will make you strong and help you.I will protect you and save you.Isaiah 41:10.

God is All, man is nothing.
Thanks to our dear loving Virgin Maria for her motherly intercession.

Only the Rosary said...

I love the Rosary

Rosary is a powerful weapon. Mother Mary will never leave our side when we pray for her intercession

thank God he was released without harm.

Thanks to our blessed mother Mary for her Divine intercession

Thanks to God. Last year one priest of India was kidnapped by ISI militants and released after 3 months. Our God is kind and loving

Glory to Jesus and honour to his mum Mary

Thanks be to God,through the intercession of our Mother Mary,the Bishop was released without harm.We praise God all the time.

Psalms 23.All glory to God

Glory to the most highy God.we praise ad honour you mother Mary

Our God is awesome,,All glory be to the most high

Rosary is the most powerful weapon I have ever known in my life.
Mother Mary is a mother who can never dispose of his children.