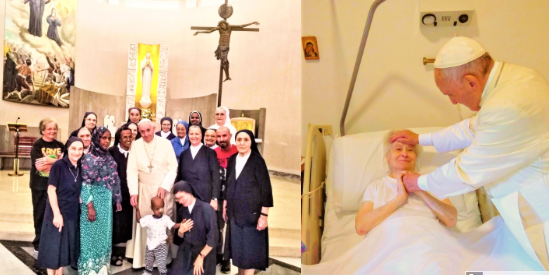 Pope Francis makes surprise visit to ailing nun
Pope Francis visited an elderly nun at the Daughters of Charity’s house in Rome on Sunday, a gesture of kindness for her years of service at the Casa Santa Marta.
By Devin Watkins

Having fallen ill, she is now in the infirmary at her congregation’s house in Rome, the Regina Mundi House.

So, on Sunday evening, Pope Francis popped in for a quick visit to the ailing nun.

He also paused for a picture with members of the Daughters of Charity community staffing the residence, along with employees and guests.

At the end of his visit, the Holy Father gave them all his blessing.
Fr. Tomaž Mavrič, CM, the Order’s Superior General, announced the news on his Facebook page.

The relic is the bloodstained shirt worn by the Polish Pope when he was shot by a gunman in St. Peter’s Square on 13 May 1981. The bullet hole is still visible on the shirt, as well as the cuts made to remove it in the operating room.

Gemelli Hospital, where he received treatment after the assassination attempt, gifted the shirt to the Regina Mundi House for the Jubilee Year of 2000.