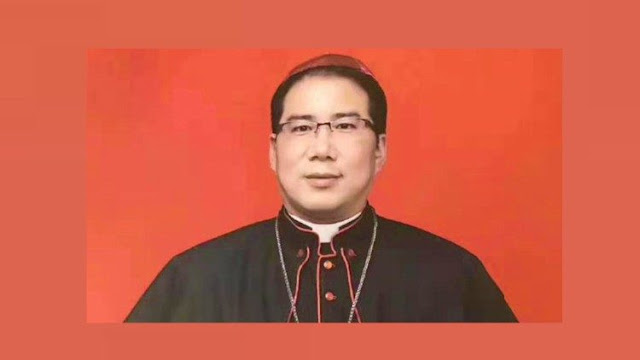 Vatican News: China, second bishop consecrated under Sino-Holy See agreement
The Vatican on Wednesday confirmed the second episcopal consecration in China under last year's Provisional Agreement between the Holy See and China. Monsignor Stefano Xu Hongwei was consecrated bishop on 28 August under the Pontifical Mandate.
The Provisional Agreement between the Holy See and the People's Republic of China, on the appointment of bishops in China, was signed in Beijing on 22 September 2018.

Nearly a year on, the deal is bearing fruit.

Responding to the questions received from journalists, the Director of the Holy See Press Office, Matteo Bruni, made the following statement on Wednesday in the Vatican.

“I can confirm that also H.E. Mgr. Stefano Xu Hongwei, who has been consecrated today, 28th August 2019, Coadjutor Bishop of Hanzhong (Shaanxi) in China, received the Papal Mandate and his ordination also took place in the framework of the Provisional Agreement between the Holy See and the People's Republic of China signed in Beijing on 22nd September 2018”.


Bishop Xu became the second bishop to be consecrated after the Provisional Agreement, following that of Monsignor Antonio Yao Shun of Jining/Wulanchabu, Inner Mongolia (China), on Monday.

The consecration ceremony of Bishop Xu in the Cathedral of St. Michael in Hanzhong was presided over by Bishop Ma Yinglin of Kunming (Yunnan), the president of the Council of Chinese bishops, AsiaNews reported.  Five other bishops and 80 priests concelebrated the Mass in the presence of around a thousand people.

AsiaNews also provided other details of the 44-year old bishop, born on 16 January 1975. In September 1993 he entered the minor seminary of the diocese of Minnan.  In September 1996, he entered the seminary of Xian and in July 2002, he was ordained a priest in the diocese of Hanzhong. In August of the same year, he was assigned as parish priest of the Nanzheng District Parish, with the task of helping in the pastoral work of Hanzhong Cathedral.

From July 2004 to June 2008 he studied at the Pontifical Urbanianum University in Rome (Vatican), obtaining a pastoral license; from November 2008 to April 2010 he continued his pastoral studies in the diocese of Vancouver (Canada).

In April 2010 he was appointed pastor of West Street Cathedral, in the Hantai district. In December 2015 he became a member of the Catholic Provincial Committee ("the two sessions": Patriotic Association and Council of Bishops).

In 2012, and in 2017, he was also a member of the Standing Committee of the Chinese People's Consultative Political Conference in the district of Ren Hantai.  On 11 April 2019, he was chosen as bishop of the Diocese of Hanzhong.

The Diocese of Hanzhong is an old mission of the Pontifical Institute for Foreign Missions (PIME). It has about 30 thousand faithful, served by 30 priests and 11 women religious with 20 thousand faithful.
FULL TEXT Source: VaticanNews.va + Image Share
Posted by Jesus Caritas Est at 10:45 AM