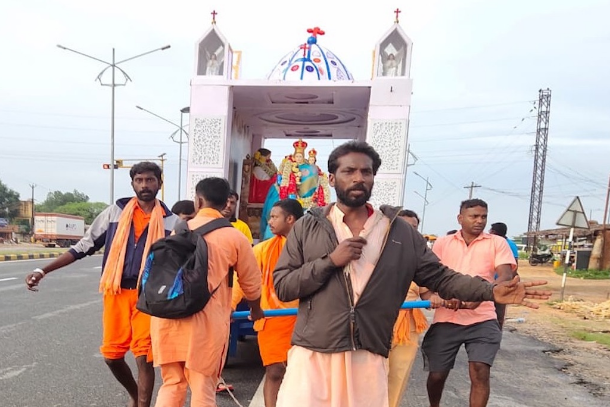 Tamil Nadu, Christians on pilgrimage to sanctuary of Velankanni attacked by Hindu radicals
by Nirmala Carvalho
The attack took place before the group was able to complete the pilgrimage.  The statue of the Virgin is also desecrated, "decorated" with a garland of slippers.  Police arrest members of Hindi Munnani.

Mumbai (AsiaNews) - A group of 40 Christian pilgrims was attacked in Tamil Nadu by some Hindu extremists who did not like their presence.  Departing from Karnataka, the faithful set out on pilgrimage to the Marian shrine of Velankanni on the coast of Tamil Nadu.  Before arriving, on August 18th they were attacked and insulted in the area of ​​Natrampalli, district of Vellore.  The radicals accused them of proselytizing because during the pilgrimage they carried the statue of the Virgin on a chariot decorated with flowers.  The statue of the Virgin was also desecrated: a garland of slippers was placed around her neck.

Sajan K George, president of the Global Council of Indian Christians (GCIC), commented to AsiaNews to "attack the 40 pilgrims while they were on pilgrimage and carrying the statue of Our Lady of Health.  They were abused by six members of the extremist faction belonging to Hindi Munnani.  The attackers claimed that the transport of Christian statues is not allowed in the residential area".

The day after the attack the police arrested the six attackers.  The agents stated that they are accused of harassment of pilgrims and that they had torn up a poster with pictures of Mary and Jesus. Murali, deputy police superintendent, reports that the attack could have had worse consequences if the agents had not intervened.  The official said that in the beginning the Christians did not even want to file a complaint.  "It took six hours to convince them," he says.

The president of the GCIC protests for "the grave abuse of religious freedom, intolerance and disrespectful behavior towards innocent pilgrims.  They feared for their lives.  Government data report that Christians are less than 3% of the Indian population, so conversion propaganda is false and fabricated ".
FULL TEXT Release from Asia News IT - Image Source: Google Images
Posted by Jesus Caritas Est at 9:03 AM

Thanks be to God the pilgrims were saved from worse attack by the police agents who intervened to protect them. May the Lord remember that the agents obeyed His natural law when they protected the innocent pilgrims. May the Lord look on their selflessness in protecting the innocent travelers even when it meant going against the local popular opinion. May He increase their courage and fortitude to protect the vulnerable regardless of personal cost. May Christians offer sacrifice in reparation for the sins committed against the Immaculate Heart of Mary. O my Jesus, forgive us our sins, save us from the fires of hell! Lead all souls to heaven, especially those in most need of Thy mercy!