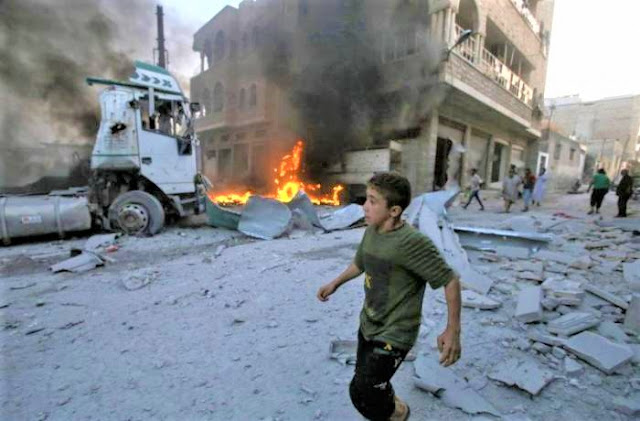 Idlib: Russian-Syrian air strikes leave 16 civilians dead, six of them children
At least 12 victims in the bombing of Maaret al-Noomane residential neighborhoods. The town is located along the highway that connects Aleppo to the capital. Also yesterday, Assad's forces struck in the Cheikh Maghar region, Hama province. A shot past a Turkish army observation point.
Damascus (AsiaNews / Agencies) - At least 16 civilians were killed and more injured in a series of air raids yesterday by the Syrian air force supported by the Russian ally in the north of the country, in an area controlled by rebels and jihadists. Among the victims, at least 12 people - including six children - died in the aerial bombardment concentrated on the residential districts of the town of Maaret al-Noomane, in the province of Idlib.

The death toll was recorded by activists on the ground linked to the Syrian Observatory for Human Rights (Sohr), a UK-based NGO, which in throughout the conflict has often been the only  -  and sometimes controversial - source of information.

The town of Maaret al-Noomane rises along the highway that connects the capital Damascus to Aleppo, once the economic and commercial metropolis of the country.

A part of the province of Idlib and some sectors of the adjacent province of Aleppo and Latakia remain in the hands of the jihadists of Hayat Tahrir al-Cham (Syrian faction of al-Qaeda) and of rebel groups supported by neighboring Turkey.

Syrian government forces, with Moscow's help, have long targeted this sector and on 8 August launched a ground offensive after four months of daily air raids.

Also yesterday afternoon, Assad's forces struck in the Cheikh Maghar region, in the northwest of the province of Hama, an area close to an observation point for the Turkish army.

A few hours after the air raids, the official Turkish agency Anadolu assured that Ankara’s "army posts" [at least 12 in total] “have not been affected".

In the Idlib region there is an agreement signed in September 2018 which provides for a "de-militarized zone" drawn by Russia and Turkey to separate Syrian government forces and jihadist and rebel militias. However, this agreement has been ignored on several occasions by the parties and has not prevented the resumption - recently - of the offensive by loyalist troops.

Since the end of April, bombings by the Syrian regular army and its Russian ally in the area have killed about 900 civilians. United Nations sources speak of more than 400,000 displaced people.

What began in March 2011 as an internal revolt against the Syrian government, the war caused more than 370,000 deaths and millions of refugees, triggering one of the worst humanitarian emergencies since the Second World War.
FULL TEXT + Image Source: http://www.asianews.it/en.html
Posted by Jesus Caritas Est at 10:29 AM