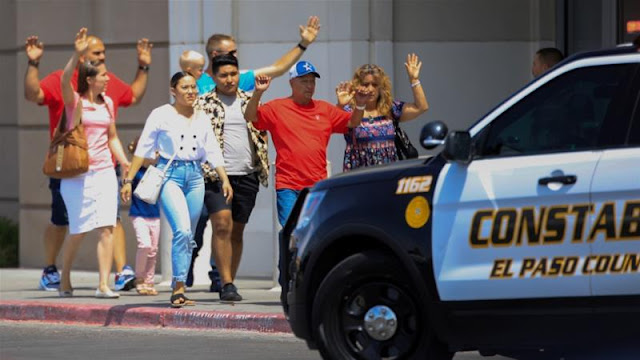 Twenty people have been killed and 26 injured in a mass shooting in the Texas city of El Paso.

Governor Greg Abbott described it as "one of the most deadly days in the history of Texas".

The massacre happened at a Walmart store near the Cielo Vista Mall, a few miles from the US-Mexican border.

A 21-year-old man is in custody. Police said the suspect was a resident of the Dallas-area city of Allen. He has been named by US media as Patrick Crusius.

US President Donald Trump described the attack as "an act of cowardice".

"I know that I stand with everyone in this country to condemn today's hateful act. There are no reasons or excuses that will ever justify killing innocent people", he wrote on Twitter.

The victims of the attack have not yet been named. However, Mexico's President Manuel Lopez Obrador said three Mexicans were among those killed. (updated to 7 Mexicans)

"We as a state unite in support of these victims and their family members," Mr Abbott said.

"We must do one thing today, one thing tomorrow and each and every day after this - we must unite."

The police and FBI are investigating whether an anonymous nationalist "manifesto", shared on an online forum, was written by the gunman. The document says the attack was targeted at the local Hispanic community.
Edited from BBC
Vatican News reports that Pope Francis, following the Angelus in St Peter’s Square on Sunday expressed his spiritual closeness to the victims, the wounded and the families affected by attacks, he said had "led to bloodshed in Texas, California and Ohio in the United States.

August 3, 2019
WASHINGTON— Cardinal Daniel DiNardo, President of the United States Conference of Catholic Bishops (USCCB), and Bishop Frank J. Dewane of Venice, Florida, Chairman of the USCCB’s Committee on Domestic Justice and Human Development, issued the following statement in response to the tragic shooting at the Cielo Vista Mall in El Paso, Texas.

“This Saturday, less than week after the horrific instances of gun violence in California, yet another terrible, senseless and inhumane shooting took place, this time at a shopping mall in El Paso, Texas.

Something remains fundamentally evil in our society when locations where people congregate to engage in the everyday activities of life can, without warning, become scenes of violence and contempt for human life. The plague that gun violence has become continues unchecked and spreads across our country.

Things must change. Once again, we call for effective legislation that addresses why these unimaginable and repeated occurrences of murderous gun violence continue to take place in our communities. As people of faith, we continue to pray for all the victims, and for healing in all these stricken communities. But action is also needed to end these abhorrent acts.”
Posted by Jesus Caritas Est at 9:44 AM