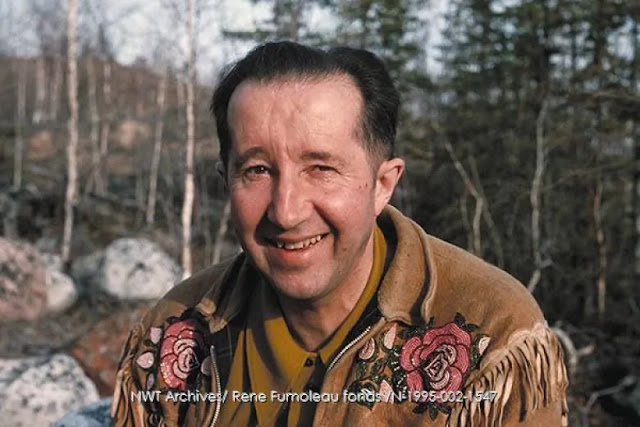 Fr. Rene Fumoleau, a well-known priest, photographer and storyteller with a long history in the North, has died at the age of 93.

Fumoleau had been living with dementia. He passed a few minutes before midnight on Tuesday, according to his close friend Patrick Scott.

It was Fumoleau's birthday. He had just turned 93.

Fumoleau was born in France. He was ordained as a Catholic priest in 1952 and came to the Northwest Territories in 1953 as an Oblate missionary.

After resigning from the Oblates, he was made a priest in the Diocese of the Mackenzie, working with the Dene in Fort Good Hope and Deline over the next several decades, according to the NWT Archives.

Fumoleau was an avid photographer, with many of his pictures being sold and published.
He did research on Treaty 8 and Treaty 11 and was known as a social justice advocate for the Dene.

His book, "As Long as this Land Shall Last," also researched Indigenous Métis rights, and Canada's dealings with the Métis.

"He took strong stands against the imposition of Euro-Western institutions on the Dene, and he did on a whole bunch of levels," said Scott. "From speaking about the politics of colonization, [to] the way he related to people as a priest.


Fumoleau also lived in Lutselk'e and Behchoko, most recently residing at a dementia facility in Yellowknife.

He was an avid photographer, with many of his pictures sold and published, as well as an author and filmmaker.


"Whatever he was doing wasn't about him, it was about the Dene. Their rights to their homeland, and the tremendous respect he had for them being so gracious, and forgiving, and generous to all of us who have come north."


Edited from CBC.ca
Posted by Jesus Caritas Est at 6:18 AM