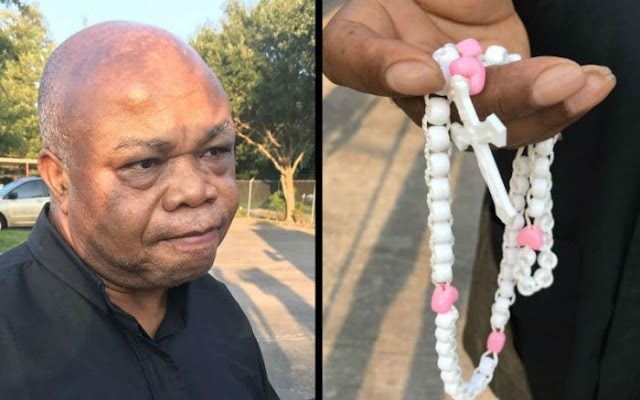 KHOU reports of a 'Divine Intervention' as a Catholic Priest was beaten by robbery suspects who later shot a Houston police officer.
The priest said he was on his knees praying when the suspects tried twice to shoot him in the head.

One of the victims of a violent crime spree that ended with a Houston police officer shot and wounded, was a priest.

Father Desmond Ohankwere was walking behind St. Peter The Apostle Catholic Church and praying the rosary when he was ambushed by four young men.

One of them pointed a gun right at his head.

"When he clicked it, I thought I was gone, so then he tried it again,” Father Desmond said.


The priest said he was on his knees praying when the suspects tried to shoot him again.

"I should be dead now, you should be talking about my burial,” Father Desmond said.

When the gun didn’t work, the men started beating him. He has bruises and scrapes to his arm, lower body and head.

They took what he had on him, which was two cell phones and some keys. They didn’t take his rosary.

But he’s alive. And it may be no surprise who the priest credits for that.

The priest says he will be fine, and is now praying for the injured officer and the suspects.


Ron Trevino
✔
@khouron
Priest who was beaten up last night as he was praying rosary behind his church. A pistol was pointed at his head twice but the gun would not fire.
He believes in miracles.#HTownrush#KHOU11
Edited from Source: Source: KHOU News - Houston

Thank you Mother Mary for saving the priest. Personally I believe Mother Mary is the mother of all the priests and she loves them so much.