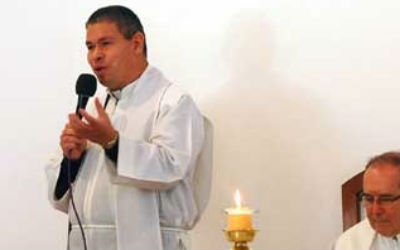 Colombian father Alfar Antonio Vélez was conceived in rape. He is pastor of two Catholic churches in Argentina. His mother decided not to have an abortion because of her faith. The Clarín newspaper told this in a story.

The mother of a Colombian priest, named Alfar Antonio Vélez, became pregnant during a rape.

The woman faced the crude circumstance of her son's conception and the moral condemnation of her family. She was able to  see her son Antioqueño Vélez become a priest in Colombia and then a missionary in Argentina.

The Catholic leader decided to tell his testimony of life based on faith, with the intention of offering a sobering message.

Vélez's mother was born in Algeria de María (Antioquia). From a young age, the woman moved to Medellín to study medicine.

One night she went out with some coworkers and they, drunk, drugged her and raped her. The consequence was a pregnancy which she decided to carry to full term, clinging to deep spiritual values ​​that gave her strength to move forward.

Her son learned the story when he was 10 years old.

"My mother was a woman of great faith, very practicing and very holy. She said that, despite the terrible circumstances, she carried in her womb the miracle of a new life, a life that God had given her and that, because of it she couldn't have an abortion, and if God had given him to her she should find the meaning in it. The hardest thing for her was to not be able to show me a father to love me, to teach me how to walk, but I bore the feeling that I filled her completely. "says Father Vélez in the article.

He tells us that over time he went to a church to claim from God the way he had come to the world. A priest who met on that occasion answered his question: "It is not why but for what." Later those words motivated him to fully incorporate himself into religious life.

"God created us in his image and likeness. My breath is the breath of God. We are the most beautiful thing in the world. So, we have no right to take the life of any innocent because it is not to blame for how it came into the world. "says the priest.


"I would say that God is the owner of life and that he made it an instrument of life. That the rapist is to blame, not the child in the womb. I think the decision to abort will end when we think that all life is a gift from God, beyond how it was conceived, of pain, or of joy, "he says.


"God uses me to do works; I am only his instrument. And if he wants my testimony to help make a person reconsider and save a life, then this interview will have been worth it," concludes the priest.

Edited from
Semana.com
Posted by Jesus Caritas Est at 11:30 AM

God bless your mom and you yourself.....Thanks for sharing your story!!!

It has been the most amazing testimony. fr. may God who is our creator keep you strong and courageous as you fulfill the purpose that He created you for.
Thank you for sharing with the world. May God bless your mom too for being the best gift for you.