Pope Francis asks for Prayers for Governments and Politicians "..pray for the other, for those who have a different opinion than I do.” in Homily 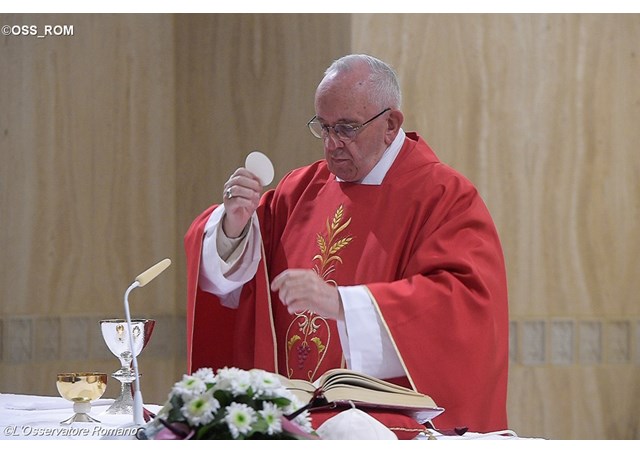 Vatican News. va reports of Pope Francis' homily at Mass. The Pontiff said to pray for people in government and for politicians, that they “may work for the common good.”
******
Vatican News -

Pope Francis issued that appeal in his homily at Mass on Monday in the Casa Santa Marta.

Prayer
The Pope said St Paul, in his letter to Timothy (1 Tm 2:1-8), calls us to pray for everyone, “for kings and for all in authority” and that it should be done “without anger or argument”. St Paul adds that we do this so “that we may lead a quiet and tranquil life in all devotion and dignity.”

“Paul emphasizes the environment surrounding the believer: prayer. Here he focuses on intercessory prayer: ‘Everyone should pray, for all, so that we may lead a quiet and tranquil life, in dignity and devotion to God.’ Prayer helps make this possible. But there is an emphasis I would like to talk about: ‘For everyone’ and then he adds ‘for kings and for all in authority’. So, he is talking about prayer for people in government, for politicians, and for the people responsible for political institutions, nations, and regions.”

Pray for those with different opinions
Pope Francis went on to say that politicians often receive either “praise from their supporters or insults”.

He added that priests and bishops receive the same treatment. Some people say they will pray for their priest or bishop “only if they are worthy”, and go on to list a litany of “insults and curse words”, said the Pope.

But, he noted, people in authority “have the responsibility to guide their nation”. “How can we leave them alone, without asking God to bless them?” he asked. The Pope said that few people pray for those in government, spending most of their time “insulting them.”

St Paul, said Pope Francis, makes it clear that we must “pray for all of them”.

“Who of us prayed for people in government? Who of us prayed for parliamentarians, so that they might reach an agreement and guide the nation forward? It seems that the patriotic spirit doesn’t reach into prayer. Sure, criticism, hate, fighting, and it ends there. ‘It is my wish, then, that in every place people should pray, lifting up holy hands, without anger or argument.’ Discussion must happen, and this is the role of parliament. Discussion must occur, but without annihilating the other. Rather, each must pray for the other, for those who have a different opinion than I do.”

Call to conversion
In the face of those who say certain politicians are “too communist” or “corrupt”, Pope Francis – citing the day’s Gospel of Luke (7:1-10) – invites us not to discuss politics but to pray.

The Pope said some people say “politics is dirty”, but Pope Paul VI held that it is “the highest form of charity”.

“It may be dirty, just like any profession can be dirty… We are the ones who dirty something but it is not so by nature. I believe that we must convert our hearts and pray for politicians of all stripes, all of them! Pray for people in government. This is what Paul asks of us. As I listened to the Word of God, I thought about this beautiful event from the Gospel – the person in authority who prays for one of his underlings: the centurion who prays for his servant. Even people in government must pray for their people, and this man prays for his servant, who may have been a domestic servant. ‘But no, he is my servant. I am responsible for him.’ People in government are responsible for the life of their country. It is good to think that, if people pray for authorities, people in government will be capable of praying for their people, just like this centurion who prays for his servant.”
Full Text Source: Vatican News.va - Image source: Google Images -
Posted by Jesus Caritas Est at 12:05 PM