Pope Francis departs for African countries Mozambique, Madagascar and Mauritius, his 31st Apostolic Journey which he entrusts to Our Lady 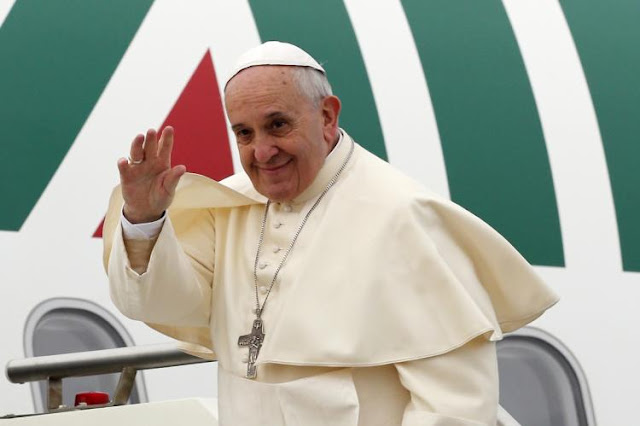 The Alitalia Airbus A-330 has been baptized "Giovanni Battista Tiepolo" for this flight.Various religious and civil leaders were at the airport to say farewell to the Holy Father.

Smiling, as usual, the Pope greeted the captain and two hostesses who welcomed him aboard. Then he turned and waved to everyone present.
Prior to leaving the Casa Santa Marta, Pope Francis met with a group of about 12 people around 7:00. The group was comprised of persons from Mozambique, Madagascar and Mauritius, the places Pope Francis will visit on this Apostolic Journey.

These immigrants have found help through the Jesuit-run Centro Astalli and the Saint Egidio Community. Cardinal Konrad Krajewski, the Papal Almoner, accompanied the group.

As I embark on my Apostolic Journey to Mozambique, Madagascar and Mauritius, moved by the vibrant desire to encounter the brothers and sisters in the Faith and the inhabitants of these dear countries, it is a pleasure, Mr President, to send you this expression of deferential greetings, which I accompany with my most fervent prayers for the good of the Italian People.
FRANCISCUS PP.

Welcome awaiting Pope in Maputo
Upon his arrival in Maputo around 6:30 Wednesday evening, Pope Francis will be welcomed by President Filipe Nyusi, who signed the latest peace accord this past 6 August with opposition party Renamo, thus agreeing to the elections which will take place on 15 October. After the welcoming ceremony the Pope will go to the Apostolic Nunciature to rest.

His Apostolic Visit will officially begin Thursday morning with a courtesy visit to the President, a meeting with civil authorities and members of the Diplomatic Corps, and an interreligious prayer meeting with young people.

Later on he will also meet with Mozambique's bishops, and a representation of priests, men and women religious, consecrated persons, seminarians, catechists and parish lay leaders.

Afterward, he will pay a visit to "Matthew 25" House which assists street children and youth.
Edited from combined reports by Vatican News.va
Posted by Jesus Caritas Est at 7:52 AM