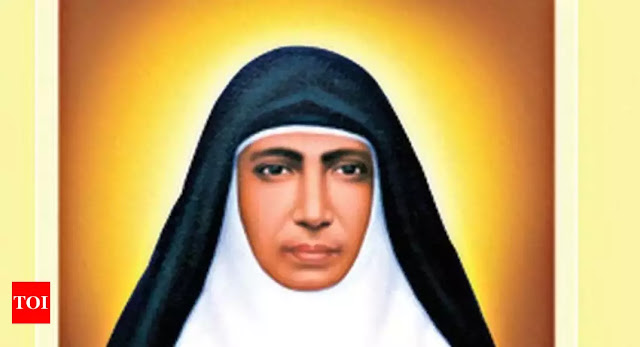 New Delhi (Agenzia Fides) - Prime Minister Narendra Modi expressed appreciation that an Indian is among the five Catholics who will be canonized by Pope Francis in October. "It is a matter of pride for every Indian that, on the coming October 13, his holiness Pope Francis will declare Sister Beata Mariam Thresia a Saint" the Prime Minister said on September 29 during "Mann Ki Baat" ("The Voice of the Heart"), his monthly radio program.
" I pay heartfelt tributes to sister Maria Mariam Thresia and congratulate the citizens of India, and especially our Christian brothers and sisters, for this achievement", said the Prime Minister.
Sister Mariam Thresia Chiramel Mankidiyan (1876-1926) founded the Congregation of the Holy Family to spread Christian values to families on May 14, 1914 in Mannuthy, a village near the town of Thrissur in the state of Kerala, in southern India.
The Indian nun will be canonized during a Holy Mass in the Vatican together with English Cardinal John Henry Newman, Italian nun Josephine Vannini, the Swiss, Marguerite Bays and Brazilian Sister Dulce Lopes Pontes.
At the Shrine of Blessed Mariam Thresia in Kuzhikkattussery in the district of Thrissur, in Kerala, celebrations began after Pope Francis approved her canonization.
"The faithful of Kerala will participate in a special prayer vigil the day before the canonization in the Vatican", said Sister Rosmin Mathew of the Mariam Thresia convent in Kuzhikkattussery.
Sister Mariam was born into a Syro-Malabar family on April 26, 1876, in the village of Puthenchira in Kerala and died on June 8, 1926 in Kuzhikkattussery. she was declared "venerable" on June 28th 1999 and beatified on April 9th 2000 by Pope John Paul II in Rome.
She built many schools, hostels and orphanages and dedicated herself to the cause of the education of women in India throughout her life.
Mariam Thresia will be the fourth Catholic of Kerala to be declared a "saint" in the Catholic Church. The first was Sister Alphonsa, a member of the Congregation of the Franciscan Poor Clares, in 2008. Pope Francis canonized Father Kuriakose Elias Chavara and Sister Euphrasia in 2014.
Today her congregation now has more than 1,500 professed nuns and 119 novices living in 176 homes in seven provinces, most of them in India, but also engaged in Germany, Italy and Ghana. (SD) (Full Text Source: Agenzia Fides, 30/9/2019) Image Share Google Images - TOI