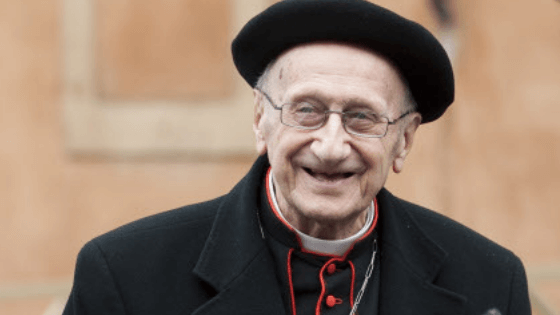 French Cardinal Etchegaray dies. Pope Francis: a man of dialogue
French Cardinal Roger Etchegaray, President emeritus of the Vatican’s Pontifical Councils for Justice and Peace, and of the Pontifical Council "Cor Unum", has passed away. The 96-year old cardinal died on 4 September in Cambo-les-Bains, in the Diocese of Bayonne, France.
By Robin Gomes

Pope Francis pained
Pope Francis learned about the death of Cardinal Etchegaray "with pain" Thursday morning, reported the director of the Vatican Press Office, Matteo Bruni.  During the Holy Mass, celebrated in the Nunciature of Maputo, Mozambique, where the Pope is on an apostolic visit, Bruni said, the Holy Father recalled the French Cardinal as a man of dialogue and peace.

Biography
Cardinal Etchegaray was born 25 September 1922 in Espelette, in the Diocese of Bayonne, France. After studying at the minor seminary at Ustaritz, he continued his studies at the major seminary at Bayonne and at the Pontifical Gregorian University in Rome, obtaining a licentiate in sacred theology and a doctorate in canon law.

After his priestly ordination on 13 July 1947, he started working in the Diocese of Bayonne.  In 1961, he began working for the Bishops’ Conference of France, and from 1966 to 1970 he became its Secretary-General.

Pope St. Paul VI appointed Auxiliary Bishop of Paris on 29 March 1969 and on 22 December 1970 he became Archbishop of Marseille and in 1975 was elected president of the Bishops’ Conference of France, a post he held for a second term until 1981.

In 1971, Cardinal Etchegaray became the first president of the newly formed Council of the Bishops' Conferences of Europe.

Throughout the years, Cardinal Etchegaray untiringly served the cause of peace, human rights and the needs of the poor, bringing the message and love of the Pope to many nations.

He organized the historic Assisi Peace Meeting in 1986 between representatives of the main religions, in the face of growing tensions in the world divided into blocs and in the face of fears of nuclear war.

On 15 November 1994, he was named President of the Central Committee that oversaw the observance of the Holy Year 2000.

Cardinal Etchegaray also carried out important diplomatic missions for the Holy See.  In May 2002, he was in Jerusalem seeking for peace in the Middle East,  and in February 2003, he was in Baghdad carrying the Pope's message of reconciliation.

On 30 April 2005, Pope Benedict XVI approved the election of Cardinal Etchegaray as Vice Dean of the College of Cardinals, from which he stepped down in June 2017, because of his advanced age.  He was 94. Pope Francis personally greeted him as he left Rome for his native land.

The funeral of Cardinal Etchegaray is scheduled for 9 September in the Cathedral of Santa Maria in Bayonne.

With his death, the number of cardinals now stands at 213 cardinals, 118 of whom are electors and 95 non-electors.
FULL TEXT from VaticaNews.va
Posted by Jesus Caritas Est at 8:21 AM