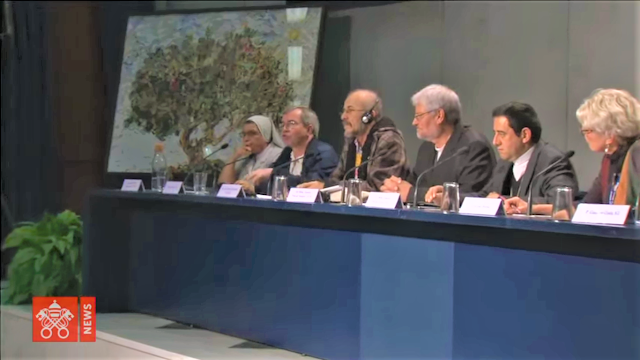 Amazon Synod Briefing: Women, Ecumenism, and Martyrs
The Synod of Bishops for the Amazon enters its closing phase with Synod Fathers expected to vote on the final document on Saturday afternoon. Meanwhile, in the Holy See Press Office, five participants share their perspectives on a variety of issues: from the role of women, to ecumenism in the Amazon.
By Vatican News

Over the past three weeks, the daily press briefings have provided an opportunity to hear, first-hand, the experiences and reactions of Synod participants coming from, or engaged in, the Amazon Region.

Sr Inés said the women participating at the Synod were calling themselves the “Synod Mothers”, reflecting the sense of family and belonging.

Her hopes for after the Synod include “building an indigenous Church with an Amazonian face – and an Amazonian heart”. To do so, we need “to deepen indigenous theology and listen to the poor”, she said. Learning local languages is important because it allows us to enter the indigenous spiritual experience, she added. While continuing to work for the protection of their rights, we need to recognize that indigenous people are asking to “stand on their own two feet”, she said.

We cannot separate integral ecology from our lifestyles, said Fr Heinz. This means supporting nature and people, above all, he added. Fr Heinz confirmed that Latin America “has made great progress” since the Second Vatican Council, “setting an example” in understanding how to live “a new way of being Church”.

He spoke of his personal familiarity with the ecumenical movement in the Amazon Region, where there is “mutual respect for different ideas”. There are more things that unite us than divide us, he said. Which is why we need to work on shared issues from a faith perspective: integral ecology, social, political, and economic questions. Taking care of our common home is everyone’s task, he added.

Bishop Evaristo Pascoal Spengler, OFM
Bishop Evaristo Pascoal Spengler comes from Marajó, “an archipelago comprising thousands of islands”, in Brazil. His presentation focused on what he called “the decisive presence of women in the early history of the Church”. “God employs women in salvation history”, he said, and gave the examples of women prophets, judges, saints, and doctors of the Church.

Bishop Spengler said over 60% of communities in the Amazon Region are led by women, serving as catechists, ministers of the Word and of the Eucharist, especially in areas where priests are able to visit “less than twice a year”. The ordination of male deacons “could be useful”, he added, to create a “Church of presence”. The role of women too “must be expanded upon”, said the Bishop, citing Saint Paul who refers to women deacons in his letters.

Bishop Spengler referred to the amendment made to the Code of Canon Law by Benedict XVI [in the 2009 Motu proprio, Omnium in mentem, Art. 2], in which the diaconal mission of serving the People of God “in the ministries of the liturgy, the word, and charity”, is separate from that of the episcopat and the presbyterate whose mission is that of acting "in the person of Chirst". This allows an opening for a path to the female diaconate, he said.

The Bishop stressed the connection between indigenous people and the concept of “buen vivir” (“good living”). For them, “buen vivir” includes integral ecology, “an invitation to universal fraternity”, said Bishop Pinzón Güiza. For indigenous people it means “something real”: keeping Amazonia healthy, protecting it from exploitation. Living in a healthy land allows indigenous people “to recognize God the Creator” and to “take care of the earth”, said the Bishop.

A question about communication
Responding to a question about how the Synod has been communicated, particularly with reference to the ceremony in the Vatican Gardens on 4 October, the Prefect of the Dicastery for Communication, Dr Paolo Ruffini, again stated that “no ritual” had taken place.

Lutheran pastor Nicolau Nascimento de Paiva, confirmed how, in the Amazon Region, “communication depends on context”, and how many people must be taught how to read before they can be introduced to the Bible. He reiterated the mutual respect felt among Christian confessions and indigenous people, saying it “has an impact on their lives, stimulates communication, becomes an opportunity for learning, and enriches exchange”.

A question about lessons learned
Sister Inés was asked what she learned at this Synod. She replied listing the great cultural riches and diverse spiritual realities. She confirmed the variety of issues facing the Amazon Region, from exploitation to migration. Most importantly, she learned to share a common objective, “to listen and to be united for the same cause”, she said.

Father Heinz added he had learned something about the pressure brought to bear “on those who are protecting the indigenous people”. He said it was “emotional” to be among people who are threatened and risk being killed for defending their rights.

' A question about ecumenical dialogue
Lutheran pastor Nicolau Nascimento de Paiva responded to a question about how the Synod can advance ecumenical dialogue in the Amazon. We are united already through “learning, prayer, exchange and shared experience”, he said. The churches in the region collaborate on a variety of issues, including working with migrants coming from the countryside to the cities, welcoming them and responding to their basic needs.

Bishop Joaquín Pinzón Güiza added how “the common commitment to finding new paths for the Church and integral ecology can unite us”. Caring for our common home “has allowed us to enter dialogue with other denominations and to decide on future actions”, he said.

A question about an Amazonian rite
The Prefect of the Dicastery for Communication, Dr Paolo Ruffini, responded to a journalist’s question regarding the adoption of an Amazonian rite. He clarified that “something this complex cannot be contained in a single paragraph, if there is one”. Discussion at the Synod concerning an Amazonian rite, he continued, was simply “a step in that direction”

The Secretary of the Synod Information Commission, Jesuit Fr Giacomo Costa, added that “many conditions” would apply for such a rite, and that, in any event, “it is the Holy Father who has the final word”.

A question about Amazon martyrs
Finally, Fr Miguel Heinz answered a question about the Amazon martyrs. Their images were displayed throughout the proceedings in the Synod Hall, and this meant, “they were always present”, said Fr Heinz. The martyrs of the Amazon “gave witness to God with their lives”, and the Synod expressed great sensitivity towards this topic, he said.
Full Text Source: VaticanNews.va - Image Source: Screen Shot