#BreakingNews 4,000 attend March for Life in Austria with Many Youth and Religious Leaders - Watch Video - #ProLife 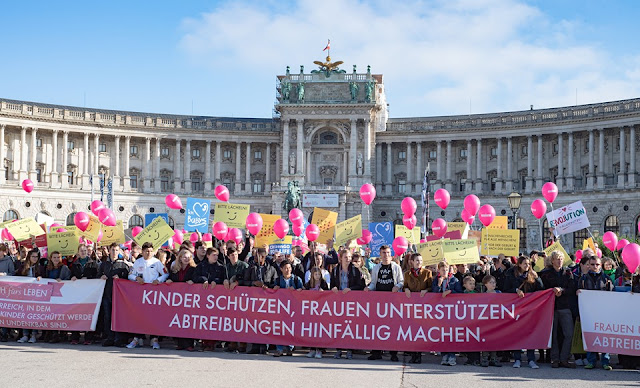 The second March for Life brought 4,000 Pro-Life marchers-
"What is required is solidarity. We must turn to a culture of solidarity. That's why I find this slogan so wonderful - love them both, the child and its mother. "On Saturday, October 12, 2019 in Austria, the second March for Life in Vienna began in the crowded St. Stephen's Cathedral with a Holy Mass. Also this year, the Viennese Auxiliary Bishop Stephan Turnovszky and Austrian bishops and took time for the most important pro-life event of the year. According to organizers, around 4,000 people took part to demonstrate for the right to life. Most of the participants were young people, families and children.

At the beginning, Turnovszky conveyed greetings from Salzburg bishop Andreas Laun, who was unfortunately unable to attend for health reasons. "It's about one big, courageous YES to everything God has done well. To love both uncompromisingly - we affirm the born as it were the unborn life. That's why I support the march for life, the parliamentary citizens 'initiative # fairänder and before that also the citizens' initiative Facts help to the statistical collection of abortions. Thank you for helping our society by taking to the streets and shouting: LOVE THEM BOTH! "

After the Holy Mass for the rally in front of the cathedral and chants of a Syriac Orthodox choir in Aramaic language, the Chorepiskopos Emanuel Aydin, and the former deputy chairman of the World Council of Churches in Austria.

"How did this happen in a Christian country? Creation is created for man and calls to us as it were: kill no human life! There is no justification for killing an unborn child. "

The bishop also criticized the religious decline in Austria and the fact that politics in Austria no longer cares about the commandments of God. And explosive and against the zeitgeist was then the criticism of the climate mystery. "This hysteria about the supposedly manmade climate change is crazy," said the bishop. "Creation is well established by God, and we must protect creation, but rationally and without panic." Aydin then clearly said that abortion was murder. "The state has to protect the children. The state must also protect the women, who are often under great pressure. That can not be for God's sake, that's a relapse into barbarism! "

At the podium, guest speaker Jonathon van Maren from Canada, who had specially come to Vienna for the Impact Congress, stated in a brief statement: "The truth is on our side, morality is on our side and science is on our side too.That's why it's so urgent that we create a science-based approach to this debate. "

Particularly impressive was a testimony of Jen Bricker from the USA, who has been in a wheelchair for years. Jen was born without legs or names, her birth parents had abandoned her and left her behind in the hospital. The doctors gave her up, but she survived. "I knew there was a purpose in my life. I practiced all sports ". She was even on tour with Britney Spears. "That's why I say YES to show how important a life can be. It's so important that we get up and fight for life. "
Image Source: Photo Credit: Facebook Marsch fürs Leben Österreich Eduard Pröls
Text Edited and Translated from Kath.net
Posted by Jesus Caritas Est at 11:41 AM