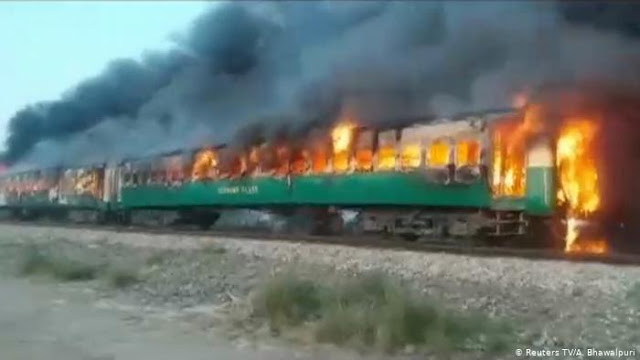 A "blazing inferno": 65 dead in Pakistan train fire
The passengers' bodies are unrecognizable. The fire broke out due to the explosion of some gas cylinders used by commuters to cook breakfast. The train is of the "Tezgam" line, one of the most obsolete in the country.

Islamabad (AsiaNews / Agencies) - At least 65 people died and 40 others were injured in a fire that broke out this morning on a train from Rawalpindi. Departing from Karachi, in southern Pakistan, the convoy caught fire near the town of Liaquatpur, district of Rahim Yar Khan, due to the explosion of some gas cylinders that passengers were using to cook breakfast.

For now, none of the victims has been identified, due to the flames that made the bodies unrecognizable. Among them, there are also several women and children. Sheikh Rashid, Minister of Railways, reports that several people were saved by jumping off the train as the flames transformed the cars into a death trap.

According to the authorities, the train that caught fire was the daily service "Tezgam", one of the oldest in the country and dating back to the 1950s. The cause was the presence of gas cylinders used for cooking during long journeys. In theory they are forbidden, but in practice passengers avoid controls. Nabila Aslam, a railway official, says that "they hide them under their clothes as they board the train, because they know that on transport they are strictly prohibited".

On Twitter, Pakistani Prime Minister Imran Khan said he was "deeply saddened by the terrible tragedy of the Tezgam train. My condolences go to the victims' families and prayers for the speedy recovery of the injured. I have ordered an immediate inquiry to be completed on an urgent basis".
Full Text Source: AsiaNewsIT
Posted by Jesus Caritas Est at 9:03 AM