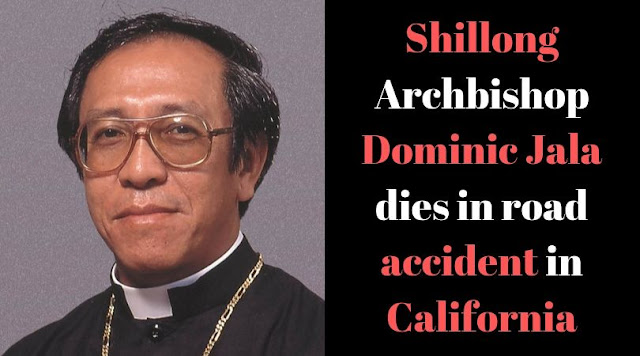 Jala and Father Mathew Vellankal (pic right) were
travelling to Clearlake in California when the Toyota Prius car they were in collided with a semi-truck in Colussa County. In a message on Facebook, the California Highway Patrol informed the Toyota Prius car may have been at fault as it had "failed to yield to traffic". Jala and Vellankal were in the driver and front seats. It is yet unclear who was driving the ill-fated car.
Jala (aged 68) was born in Meghalaya and had been appointed as the archbishop of Shillong on December 22, 1999, and ordained as archbishop on April 4, 2000. Jala had gone to the US to attend a meeting on English liturgy in New York.
Prime Minister Narendra Modi expressed grief at the death of Jala. In a tweet, Modi wrote, "Anguished by the passing away of Most Rev. Dominic Jala, the Archbishop of Shillong. He will be remembered for his impeccable service to society and passion towards Meghalaya’s progress. May his soul rest in peace."
Father Vellankal was the pastor of the St Isidore Parish in California since 2016. Vellankal was a native of Kerala and had been ordained a priest in 1987.
Source: Edited from theWeek.in  - Image Source: TNT - Google Images

May their souls and of the faithful departed thru mercy of God Rest In Peace AMEN.