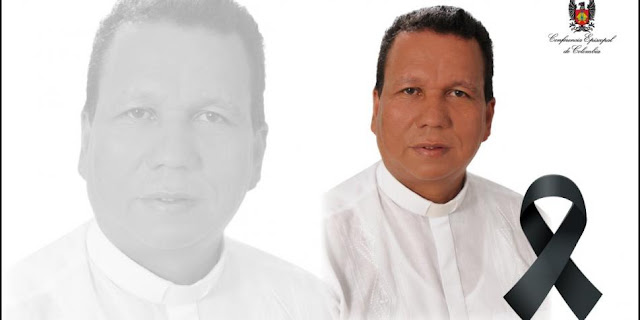 Villavicencio (Agenzia Fides) - "We raise prayers to the Lord so that Father Jhony will be welcomed into the Father's house; we pray for the conversion of his murderers and we reject all forms of violence that threaten the life and dignity of people", with these words the Archdiocese of Villavicencio, through the words of Mgr. Oscar Urbina Ortega, informs of the violent death of presbyter Jhony Ramos, parish priest of the parish of Jesus de la Misericordia in the Comuneros district in the town of Villavicencio, which took place on 2 October.
The 53-year-old priest was found dead, his feet and hands tied, in the parish house. A first comment by the police investigating what happened is that he was the victim of a theft, given that he had recently organized a parish lottery. "The first signs show that the priest was suffocated and hit in the head with a blunt instrument, we hope to learn more after the autopsy results", commented a law enforcement official in charge of the investigation to the press.
Father Jhony is the second Colombian priest killed this year (see Fides, 20/2/2019). He was loved by all the faithful, even though he had been at the head of the parish for only 4 months.
Cauca was disputed between the army, paramilitaries and guerrillas of the Fuerzas armadas revolucionarias de Colombia (Farc). Instead of the guerrilla, demobilized, today old and new armed gangs are trying to "regain it". At stake is the control of the coca fields, or better, of the land that the armed groups would like to turn into drug plantations, given the favorable climate.
The Church has always been a protagonist in soliciting the presence of the State and development in the area. After the violent clashes on April 3 in Cauca, where one demonstrator died and six others were seriously injured, the mayor of Pasto, Pedro Vicente Obando, had asked to meet Mgr. Oscar Urbina, President of the Bishops' Conference, with the goal to formally request the mediation of the Catholic Church to try to promote dialogue between the indigenous communities of Cauca and President Duque (see Fides, 09/4/2019). On 15 March the Catholic Church, through the Bishop of Popayán and the Apostolic Vicars of Guapi and Tierradentro, the ecclesiastical jurisdictions that comprise the territory of the Cauca, had insisted on the request to "move forward in the construction of a reconciled and peaceful people". (CE) (Agenzia Fides, 3/10/2019)
Image Share - Eltiempo.com - Google Images