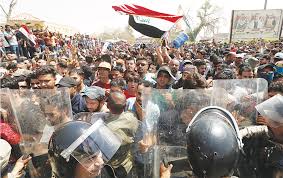 Iraqi prime minister appeals for calm as mounting protests leave 42 dead (latest update by CBC) and 650 wounded.
Adel Abdel Mahdi, addressed the protesters, claiming to accept their "legitimate demands". A curfew is in force in Baghdad and in southern cities with a Shiite majority. The Kurdish region in the north and the Sunni area in the west are quieter. The protesters promise to continue "until the fall of the government".


The large protests involving thousands of people began Tuesday. The Iraqi Prime Minister has intervened with a (rare) TV speech to the nation to invoke "calm" and "moderation".

The people are demonstrating against corruption and unemployment. Adel Abdel Mahdi used conciliatory tones and said he accepts the "legitimate demands". However, a hard line prevails among the protesters who demand the resignation of the head of government and his executive.

The premier says he wants to respond to the concerns and demands of the population; at the same time, he warns that, to date, there are no "magic solutions" to solve the long-standing problems that afflict the nation and prevent it from recovering after years of conflict and violence. The crisis that began after the US invasion in 2003 and was exacerbated by the rise of the jihadist group Islamic State (IS, formerly Isis) in 2014, now defeated on the military but not on the ideological level.

A curfew has been in effect since yesterday in Baghdad and in several cities of the country, especially in the south. Only those traveling to and from the capital's international airport are exempted from the provision. Added to these are ambulances and security vehicles, as well as pilgrims traveling for religious reasons.

However, thousands of people continue to challenge the authorities bans and continue with street demonstrations. In his televised speech, the Prime Minister called for the support of parliamentarians and promised the approval soon of a law that would guarantee support for the poorest families.

The protests, which do not seem to have been organized or sponsored so far by political parties, religious organizations or foreign forces, are the most important since Mahdi's rise to power in October 2018. In this regard, the United States and the United Nations have expressed deep concern and they appealed to the Iraqi authorities to use "moderation" in dealing with them.

Security forces blocked Baghdad's most important roads and bridges. In most parts of the country, internet access is limited, if not blocked. Nevertheless, the protesters continue to march, evoking Tahrir Square where in recent days the police used tear gas and bullets to disperse the crowd.

"We will continue until the fall of the government," 22-year-old Ali, one of the many graduates out of work today, told AFP. "I have nothing - he adds - if not the 250 lira [$ 0.20] in my portfolio, while government officials have millions". To date, the protests are concentrated in the capital and in the southern Shiite-majority cities, while the Kurdish region in the north and the Sunni-majority area in the west remains mostly calm.

These protests reflect a widespread feeling of discontent and powerlessness. Iraq is the fourth nation in the world for oil reserves, but 22.5% of its 40 million inhabitants live on less than $ 1.90 a day (World Bank 2014 data). And one in six families experience severe food shortages. Last year the unemployment rate was 7.9%, but among young people the percentage doubles. 17% of the active population is out of work.

For the post-ISIS reconstruction work, at least 88 billion dollars are needed. According to UN estimates, one million people are internally displaced and 6.7 million are in urgent need of humanitarian assistance.
Edited from Asia News IT with updates from CBC.ca - Image Source: Google Images
Posted by Jesus Caritas Est at 7:45 AM