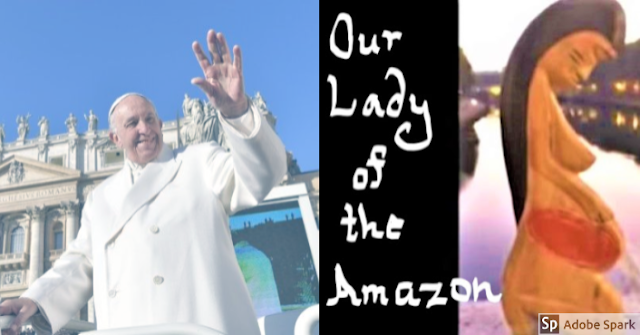 Pope Francis announces retrieval of indigenous statues (VaticanNews.va)
The Holy See Press Office has provided a transcription of Pope Francis’s remarks concerning several indigenous statues, stolen earlier this week and thrown into the Tiber River. The Holy Father spoke off-the-cuff following the liturgical prayer that opened the afternoon session of the 15th General Congregation of the Synod for the Amazon.
Pope Francis' words:

Good afternoon. I want to say a word about the statues of the pachamama (N.B. "Vatican spokesman Matteo Bruni said the pope used the word as a means to identify the statues because that is the way they have become known in the Italian media and not as a reference to the goddess.")
that were taken from the church of the Transpontina – which were there without idolatrous intentions – and were thrown into the Tiber.
First of all, this happened in Rome, and, as Bishop of the Diocese, I ask pardon of the persons who were offended by this act.

Then, I want to communicate to you that the statues which created such attention in the media, were retrieved from the Tiber. The statues were not damaged.

The Commander of the Carabinieri desires that you should be informed of this recovery before the news is made public. At the moment, the news is confidential, and the statues are being kept in the Italian Carabinieri Commander's office.

The Commander of the Carabinieri has expressed his desire to follow up on any indications that you would like to give concerning the manner of publication of the news, and any other initiative you may want to take in this regard: for example, the Commander said, “the exhibition of the statues during the Holy Mass for the closing of the Synod”. We’ll see.

I have delegated the Secretary of State to respond to this.

This is a bit of good news. Thank you.
Full Text Source: VaticanNews.va
Posted by Jesus Caritas Est at 4:01 PM