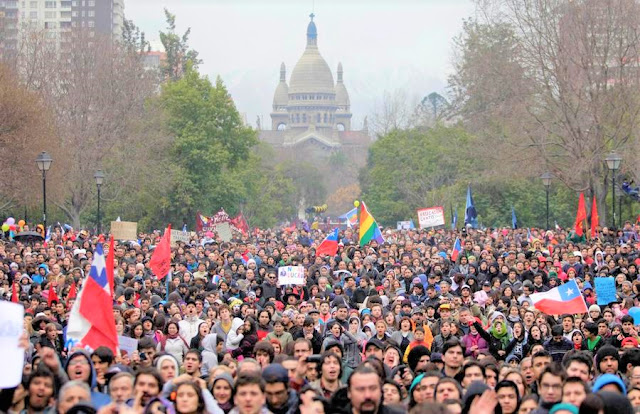 CBC reports that demonstrators display flags and banners during a protest against President Sebastian Pinera in Santiago. Protests begun on Friday and developed into looting and arson, generating chaos in Santiago, Valparaiso and a dozen other cities, resulting in at least 12 deaths.
Protesters defied an emergency decree and confronted police in Chile's capital Monday, continuing violent clashes, arson and looting that have left at least 12 dead and led the president to say the country is "at war."

Police used tear gas and streams of water to break up the march of students and union members on one of Santiago's main streets Monday, but demonstrators who at first dispersed later reformed elsewhere.

Police and soldiers guarded long lines of Chileans who lined up before supermarkets that had reopened. Many remained closed after a weekend that saw scores of stores looted or burned.

Only one of the city's six subway lines was operating because rioters had burned or damaged many of the stations, and officials said it could take weeks or months to fully restore service.

Some two million students were forced to stay home from classes and many people were unable to reach jobs.


A demonstrator waves a Chilean flag next to a fire as clashing with riot police during a protest on Monday in Santiago. ( Marcelo Hernandez/Getty Images)

Conservative President Sebastian Pinera said the country is "at war with a powerful, relentless enemy that respects nothing or anyone, and is willing to use violence and crime without any limits," though he did not say who the enemy is.

Pinera also said late on Sunday that his government was extending a state of emergency to cities in its north and south after at least seven people were killed over the weekend amid violence clashes and arson attacks.

UN calls for probe into deaths
UN human rights chief Michelle Bachelet, a former president of Chile, called on Monday for independent investigations into the protest deaths, citing "disturbing allegations" of excessive use of force by security forces.

Bachelet made no explicit reference to her successor, Pinera, in her statement calling for immediate dialogue and a halt to "inflammatory rhetoric" that she warned could aggravate the situation.

I’m deeply disturbed and saddened to see violence, destruction, deaths & injuries in #Chile. I urge the Govt to work with all sectors to find solutions to address grievances and bring calm. I urge all planning to take part in protests to do so peacefully:

"The authorities must act in strict accordance with international human rights standards, and any application of the state of emergency must be exceptional and rooted in law," Bachelet said.

Up to 13 people have possibly died, with 44 injured, nine of them seriously, and 283 detained, Bachelet said, citing figures from the National Human Rights Institution. Dozens of members of the security force had also been reported as injured, she said.

The Interior Ministry had put the number of detainees in custody at 1,906, she added.

Tousands of protesters came out into the streets of Santiago and clashed with police in Plaza Italia with water cannons and tear gas used by authorities to disperse the crowds. 2:18

'Government cares more about the wealthy'
The protests have shaken and surprised a nation noted for economic stability over the past decades, which has seen steadily declining poverty despite persistent high rates of inequality.

They were triggered by a relatively minor increase in subway fares of less than four per cent, but analysts said they were fed by frustration over a long-building sense that many Chileans were not sharing in the nation's advances.

"I'm protesting for my daughter, for my wife, for my mother, not just for the 30 pesos of the Metro — for the low salaries, for the privileges of the political class, for their millionaire salaries," said Andres Abregu, an Uber driver who complained he's still paying a student debt and can't provide a decent life for his family.
Edited from CBC News - Image Source: Google Images
Please Pray for Peace in Chile....
Posted by Jesus Caritas Est at 11:47 AM