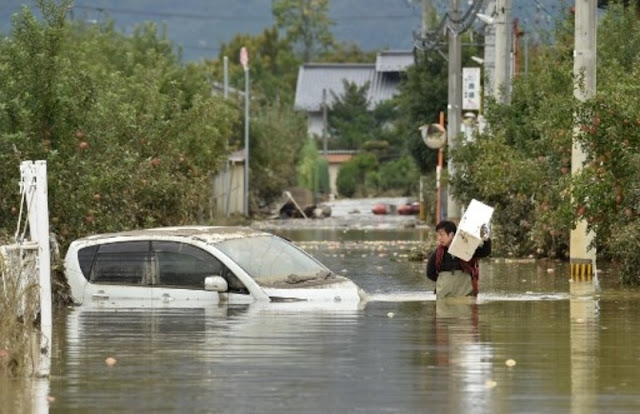 
Tokyo (AsiaNews / Agencies) - The death toll from typhoon Hagibis has risen to 40 this morning, while search and rescue teams continue to operate in areas hit by floods and landslides in central and eastern Japan. The storm moved away from the Japanese archipelago yesterday, and despite having largely spared the capital, it left a trail of destruction in the surrounding regions: the authorities counted 17 missing persons and 189 wounded.

The government chief secretary, Yoshihide Suga, reports that more than 110,000 police officers, firefighters, soldiers and coastguard personnel as well as about 100 helicopters are mobilized for the rescue operations. In several locations in the country, the aircraft rescued the survivors from the roofs and balconies, but in Fukushima an operation ended in tragedy when a woman fell from the stretcher that was carrying her on board.

At a disaster task force meeting, Prime Minister Shinzo Abe said the government will do everything possible to support the people affected by the typhoon and its consequences. The premier added that he will set up an interaction group to improve shelters and help displaced people find a place to live.

The Fire and Disaster Management Agency states that at noon today, about 38,000 people in 17 prefectures have evacuated their homes. "We fear - continued Abe - that the impact [of the storm] on life and economic activity may persist. "We will respond in the best possible way, continuing to think about how many suffer."

The premier asked the cabinet ministers to ensure the rapid restoration of infrastructure such as electricity and water systems; to provide food, water and other materials without waiting for requests from local authorities.

The 19th typhoon of the season dumped record rains that led to rivers breaking banks, flooding residential neighborhoods and causing landslides in 11 prefectures. Displaced people who could not go home continue to take refuge in places like local schools. The Ministry of Land, Infrastructure, Transport and Tourism states that 21 rivers have flooded into Nagano, Fukushima, Ibaraki and three other prefectures.

The water system "has not held up," says Fr. Gianluca Belotti, missionary of the Pontifical Institute for Foreign Missions (PIME) for 11 years in the country. "In just 12 hours - continues the priest - typhoon Hagibis has unleashed the amount of water that a normal storm releases in three or four days. The authorities have never recorded anything similar. 70% of the country is mountainous, which is why the storm has not crossed the country. It entered the bay of Tokyo and then headed north with extreme slowness".
FULL TEXT Release from AsiaNewsIT - Image Source: Free Malaysia - Google Images

Posted by Jesus Caritas Est at 8:58 AM