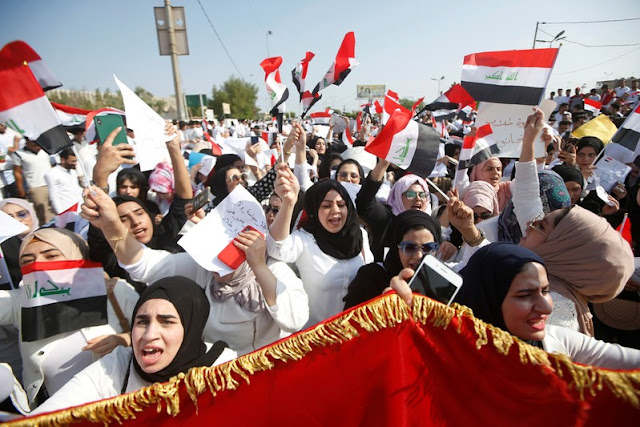 Kerbala police shoot protesters: at least 13 dead and 865 wounded
The demonstrators challenged the night curfew and poured into the streets and squares. In response, security forces (and masked men) opened fire. On social media, videos of violence. A child in tears screams: "My father was killed". Since October 1, over 260 dead and 3600 wounded.


Baghdad (AsiaNews / Agencies) - The provisional toll of a series of violence during the night in Kerbala, a holy city for Shiites, is at least 13 dead and 865 injured, about 100 km south-west of the capital Baghdad.

According to local medical and security sources, the police and military opened fire on protesters, in the streets - as in many other centers in the country - to protest against corruption and unemployment and to demand the resignation of the current government.

According to some unconfirmed sources, masked men belonging to an unidentified group opened fire.

In these hours, amateur videos circulated by protesters on social media talk of a “massacre". One video shows a child in tears asking "where is my father", while another desperately screams "my father was killed".

The city is home to the sanctuaries of Imams Husain and Abbas and yesterday had already recorded heavy clashes between citizens and police. The protesters ignored the order imposed by mayor Nassif al-Khattab to stay in the houses from 6 pm until the following morning and poured into the streets and squares.

In response, the military used tear gas and bullets to disperse the crowd.

Yesterday Iraqis took to the streets in various parts of the country, especially in the majority Shi'ite cities of the south, for the fourth day in a row, after two weeks of relative calm. Already at the weekend there were dozens of deaths and injuries, in an escalation that arouses fear and concern.

The Chaldean patriarch visited a hospital in the capital to bring comfort to the young patients, most of them Muslims. He also renewed the call for calm and moderation "in a context that is becoming ever more delicate".

Since the first of October over 260 deaths and more than 3600 people have been injured.

In an attempt to avert further violence and stem the protests of high school and university students, the army imposed a nighttime curfew also in Baghdad.
Source: AsiaNews.it - Image Source: Google Images