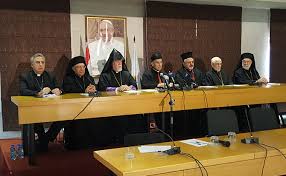 Beirut (Agenzia Fides) - The Heads of Churches and Christian communities present in Lebanon pay homage "to the people who expressed their unity" and ask to "embrace and protect the legitimate revolt of our children", stressing the urgency "that power and government respond to their national demands". These are the passages with greater impact contained in the appeal released by Patriarchs and representatives of Christian communities who met on Wednesday 23 October to try to express a common position before mass demonstrations against the government and political leadership that are shaking the Country.
The Heads of Churches and Christian communities distance themselves from the national political leadership, and before the crisis they try to claim the role of unheard "prophets": "We had warned - we read in what has been labeled by the media as "the appeal of Bkerké "- that what is happening today was in the air, but the governments that had the leadership of the Country ignored our appeals". The pronouncement, read by Maronite Patriarch Boutros Bechara Rai, also expressed considerations regarding the reform proposals and economic measures prepared by the government led by the Sunni Saad Hariri in an attempt to respond to the demands of the people: "The reform plan" reads Bkerké's appeal "is a positive first step, but a reshuffle of the government and the start of an administration run by competent and patriotic people", he said. "We ask the head of State to immediately begin consultations with political leaders to take the necessary measures to meet the needs of the population". Addressing the protesters, the Heads of Churches and Lebanese Christian communities asked them to avoid the maneuvers of those who want to exploit their cry, avoiding attributing the traits of a "coup movement" to popular demonstrations and protecting the bond that unites the people to the army and to the security apparatus.
In the afternoon of Wednesday 23 October - the national media inform - Lebanese President Michel Aoun had a telephone conversation with Maronite Patriarch Bechara Rai to discuss with him the contents of the Appeal of Bkerké.
The meeting of Lebanese ecclesiastical leaders was exceptionally attended by Sheikh Abdel Latif Darian, Mufti of the Lebanese Republic, who called the state and the government to take on the "rightful demands" of the protesters.
What caused the explosion of popular discontent, which has its substantial root in the economic crisis experienced by the Country, were the new taxes set by the government on the use of whatsapp and other means of media. (GV) (Full Text Source: Agenzia Fides, 24/10/2019)
Posted by Jesus Caritas Est at 9:59 AM