Latest from the Amazon Synod : "... the Church needs to speak with a “prophetic voice” in order to address the health of the entire planet." Full Video 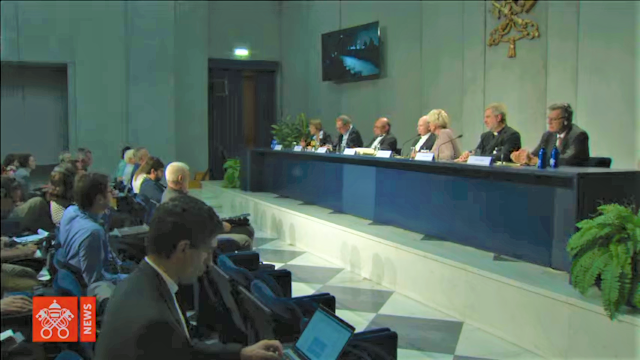 Amazon Synod Briefing: Ecological sins and integral responses
The Day 5 briefing in the Holy See Press Office hears testimonies and answers questions regarding the Synod for the Amazon.
By Vatican News

There were four Synod participants on the podium in the Holy See Press Office on Friday afternoon, each of them sharing their impressions of the discussions so far, and responding to journalist’s questions.

Cardinal Carlos Aguiar Retes, Archbishop of México (Mexico)
Cardinal Carlos Aguiar Retes opened his presentation with a call for “ecological conversion”. Climate change has amplified the “cry of the poor”, he said, and an “integral ecology” is the Church’s response. The Cardinal explained that an integral ecology means a change of lifestyle, abandoning the throwaway culture. It is essential we increase awareness, he said, because it is the poorest people on earth who are being affected.

Archbishop Pedro Brito Guimarâes, of Palmas (Brazil)
Archbishop Pedro Brito Guimarâes, of Palmas, said he comes from Brazil’s youngest State, in the heart of the country. 1.5 million people live there, along with 9 million heads of cattle. The cattle, said the Archbishop, often enjoy better healthcare than the people. That’s because their meat is exported to countries overseas. The primary animal feed in the region is soybean meal, but overplanting has had a negative impact on the earth, said Archbishop Pedro. The land is eroded, while pesticides and chemicals used to grow the soy have polluted the rivers. Cattle raising also requires a lot of water, and this too risks destroying natural resources.

Archbishop Pedro went on to speak of what he called “ecological sins”. They may be something new, he said, but we need to start confessing them. Quoting Pope Francis, he added how “everything is connected”, when you touch something you create a chain reaction, he said. The whole of humanity will feel the effects of decisions taken at this Synod, concluded the Archbishop.

Bishop Joaquín Pertíñez Fernández O.A.R. of Rio Branco (Brazil)
Bishop Joaquín Pertíñez Fernández began by emphasizing he comes from an area that crosses two time zones. The Bishop went on to speak about the history of his Amazon Region, which is not well known, he said. This is partly because the local culture is based on wood, rather than stone, so things disintegrate more easily. He spoke of coming of a land of martyrs where someone is “buried under every tree”. Bishop Fernàndez described how the people of this area were enslaved. Forced to sell their produce to their employers, they were trapped in a situation from which they rarely escaped alive, he said.

The Church was not present in this “place of human suffering”, explained the Bishop, because of the distances and lack of communication. It could take a month for the bishop to reach this area by canoe. And it will take a long time for the people of this territory to recover from all their “sad and cruel history of violence”, said Bishop Fernández. It will take several generations before they feel free to think for themselves and to make decisions, he said.

Sister Birgit Weiler, Congregation of Medical Missionary Sisters
Sister Birgit Weiler began her presentation by confirming that the Church wants to walk together with the people of the Amazon Region in order to confront this dramatic situation. Quoting the Instrumentum laboris, she said the Church needs to speak with a “prophetic voice” in order to address the health of the entire planet. We need to welcome the culture of the indigenous people, said Sister Weiler, and their vision of “buen vivir”, which means to live more in common among ourselves and in solidarity with the Earth itself.

When we maltreat the earth, we are maltreating ourselves too, she added. Sister Weiler called for the introduction of an integral ecology at all levels of the Church, and suggested reducing the use of plastic to zero. She also spoke in favour of advocating for indigenous peoples, especially when their rights are violated.

A question about multinational corporations
Sister Birgit Weiler also responded to the first question regarding multinationals not complying with the law. She affirmed how we all live in a common home and fighting for the rights of others is important. Then she gave the example of how Germany has passed a law according to which companies that cause environmental damage are held accountable even when they commit that damage in other countries.

Sister Weiler spoke of a network of collaboration among conferences of men and women religious, especially in Peru, where she works. Shareholders from multinational companies need to be made aware of the situation through lobbying, she added, to ensure companies respect local peoples’ rights. Often, the lives of Europeans and Americans are considered more valuable than those of people living in these territories – despite us all living together in one common home.

A question about isolated indigenous communities
Archbishop Pedro Brito Guimarâes chose to respond to the issue of isolated indigenous communities. Some of them choose to remain isolated, he explained. Others are forced to escape because their territory his being invaded. They go deeper and deeper into the forest, continued the Archbishop, and have no contact with other people. This leaves them open to diseases. Some die from a common cold. Sometimes it is impossible to reach them, he said. Not having any contact with these isolated peoples, we do not know how they think, or what they want. The Synod is discussing this theme, said Archbishop Guimarâes. It is important for the Church to protect their right to live in their own way, he added.

A question about evangelical churches
Cardinal Carlos Aguiar Retes began answering the question regarding the presence of evangelical churches in the Amazon Region, by affirming that people “want the Word of God, first and foremost”. He cited studies that show people migrating from one Church to another, but said it will take time to analyze this phenomenon properly. Sometimes it is simply because people hope to solve a series of difficulties and look for responses in different areas, he said.

Archbishop Pedro Brito Guimarâes added his reflection, saying it is impossible for priests to be everywhere, given the vast distances. If someone comes proclaiming the Word of God, people will follow them, he said.

Bishop Joaquín Pertíñez Fernández agreed that the Synod needs to analyze this situation but that we cannot solve all health, educational, or financial problems.

Sister Birgit Weiler quoted the Synod working document as saying the Church needs to move from a pastoral ministry of visit to a ministry of presence. Being with these peoples is extremely important, she said. We need to explore all the ministries, not just ordained ministries, said Sister Weiler, because “everything is connected” regarding this challenge.

A question about women’s participation at the Synod
Sister Birgit Weiler went on to answer the following question about the atmosphere in the small working groups and the recognition of women’s ministry. She began by affirming “there is not a clerical attitude” in the working groups, and how “freedom of speech” has favoured an atmosphere where “critical questions can be put on the table respectfully and openly”. She described it as a beautiful experience of “discerning together”.

A good number of Bishops and Cardinals share the concerns the women have, and understand there are things that pain them and why, continued Sister Weiler. She confirmed there is recognition of women, but added that becoming a fully synodal Church means walking together, deciding together, having women in positions of leadership. All women, lay and religious, ought to be able to assume positions of responsibility, she said.

Sister Weiler recalled how the Synod working document confirms that women perform most of the pastoral work in the Amazon Region. Many women are working with indigenous peoples and want to be involved with indigenous theology, she said. She described this as “a sign of our time” that women are involved at this level. She also mentioned working to overcome violence against women, standing up for justice, and overcoming a “machismo” culture.

“Creation is a gift of love from God the Creator”, she said, and this is the meeting point with women of other religions. Many women are working to build bridges where differences often cause separation. This is not a power struggle, explained Sister Weiler, it is This is not a power struggle, but a sharing of our “gifts of baptism, our vocation and insights, talents and charisms”.

Responding to a follow-up question concerning women voting on the Synod final document, Sister Weiler noted how there are 35 women present in various capacities in the Synod, and this is a significant step forward. Like many other religious women, she said, they would like to reach the point where their Superiors General would be able to vote just as Men Superiors General can. There is no real reason why they shouldn’t, she said.

A question about ecological sins
Archbishop Pedro Brito Guimarâes picked up on his earlier comment about “ecological sins”. He confirmed he is an optimist and is convinced that “a different world is possible”. However, unless we take care of nature, “we compromise the preconditions for our lives”, he said. While we profess in the Creed that we believe in God, “the Creator of Heaven and Earth”, we continue to sin against nature “without ever questioning ourselves”.

We need to start thinking about a simpler, more essential, life-style, suggested the Archbishop. We need to question ourselves, from a religious, social, economic perspective, he added. “We are not owners of Nature”, said Archbishop Guimarâes, only her guardians.

We have no other planet where we can live, he concluded. So we had better take care of this one.

Full Text Release by VaticanNews.va
Posted by Jesus Caritas Est at 11:40 AM