Latest from the Amazon Synod - The Church... needs to be even closer to the indigenous people “who are in the forefront” and who risk being “persecuted and killed”. 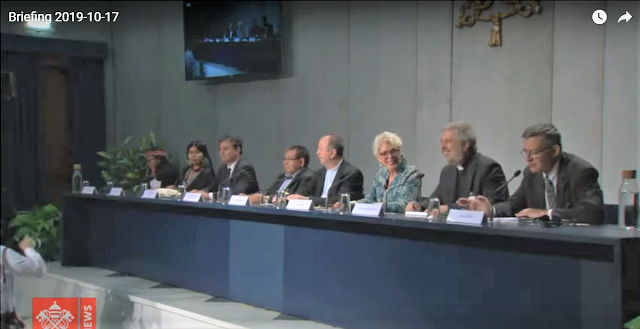 Amazon Synod Briefing: Education and the rights of Nature
Synod participants continue their discussions in small working groups on Thursday morning, and a panel of experts share their experiences during a briefing at the Holy See Press Office.
By Vatican News

Those experiences all came directly from the Amazon Region thanks to the four guests on the panel: they included an indigenous educator from Guyana, an expert in indigenous spirituality, and a specialist in indigenous rights, both from Brazil.

Ms Leah Rose Casimero
Ms Leah Rose Casimero coordinates a bilingual education programme for Wapichan children in Guyana. In her presentation, she spoke of how education systems have been “imposed” on her people “along with everything else”. The time has come, she said, “to take our future into our own hands”.

This implies “creating something better for our children” in terms of culture, traditional knowledge, and language, she said. In her educational model, language is not taught as a subject, but as the medium itself.

Ms Casimero is herself Wapichan and said indigenous people are not often listened to. This is not the case in the Synod, however, where she feels people respect one another, speaking and listening “as partners”.

Ms Patricia Gualinga
Ms Patricia Gualinga is an indigenous leader of the Kichwa community in Sarayaku, Ecuador. In her intervention she called for an “institutional commitment” to save the Amazon. Confirming it is one of the most important biomes on the planet, she said this kind of commitment would be “for the benefit of all humanity”.

The Church is present in the Amazon Region, said Ms Gualinga, but needs to be even closer to the indigenous people “who are in the forefront” and who risk being “persecuted and killed”. Nature, she concluded, is our common home.

Fr Justino Sarmento Rezende, S.D.B.
Fr Justino Sarmento Rezende has been a Salesian priest for 25 years, and is an expert in indigenous and inculturated pastoral spirituality in Brazil. His presentation focused on creating an Amazonian Church with “a new face”. He spoke of “giving value to tradition and cultures”, and said he dreams of developing “new ways of evangelizing”. Fr Rezende concluded by inviting journalists present in the Vatican Press Office to “Come to the Amazon and see for yourselves!”.

Archbishop Roque Paloschi
Archbishop Roque Paloschi of Porto Velho in Brazil said his intervention at the Synod had dealt with the issue of “indigenous people living in voluntary isolation”. He quoted Pope Francis’ Encyclical, Laudato sì, when it addresses the dangers of allowing cultures to disappear, and repeated the need to “protect our vulnerable brothers and sisters” in the Amazon Region.

A question about a Church with an Amazonian face
In response to a question, Fr Justino Sarmento Rezende expanded on the idea of a Church with an Amazonian face: “A face is an expression of what is in our hearts”, he said. In this sense, it doesn’t necessarily mean doing things the way the original missionaries did, he added. We need to “evangelize in our own language”, we need to “know and understand the lives of indigenous people”. This means being “present”, said Fr Rezende.

A question about intercultural education
Answering a question directed at her personally, Ms Leah Rose Casimero described something of her experience in the field of intercultural education with Wapichan children in Guyana. That experience is just a year old, she said, as the bilingual model was only implemented in September 2018. Which is why “training teachers is a priority”, she said.

Ms Casimero explained how this is the first experiment at “incorporating indigenous language, knowledge, traditions, and ways of life”, with national educational standards. In fact, the Ministry of Education in Guyana is starting to revise the education system in the country and is following her programme “with interest”, she said, to see if it can be applied among other indigenous people.

A question about inculturation
Archbishop Roque Paloschi responded to a journalist who asked whether inculturation was seen as “an end in itself”. He explained that the Church is committed to inculturation which means respecting “both sides”, not eliminating the culture of the other, but preserving that which is already present. He quoted Benedict XVI as saying the Church does not evangelize by proselytizing, but by witnessing.

A question about development models
Dr Felicio de Araujo Pontes Junior responded to a question concerning development models, and considering Nature as a legal issue. He distinguished between what he called “predatory models”, like logging and mining, and “socio-environmental models” that engage with institutions and governments.

Research shows that “a new species is discovered in the Amazon every 15 days”, he said. The Amazon forest is an “asset”, he added. Allowing it to thrive “makes economic sense”, and the indigenous people are “the guardians” of these assets. “Nature has rights”, concluded Dr de Araujo Pontes. “Humanity cannot destroy ecosystems in the name of progress”, he said.
Full Text Source: VaticanNews.va

Posted by Jesus Caritas Est at 8:41 AM