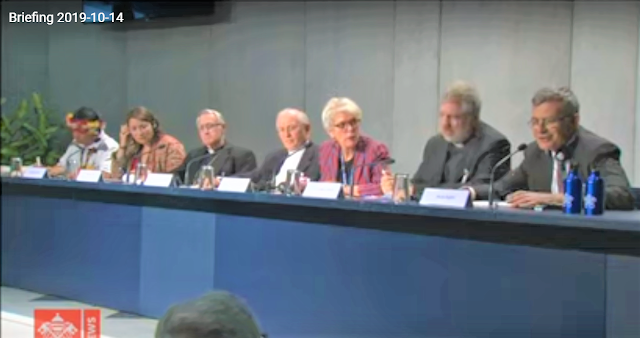 #Amazon Synod. The Church’s commitment against violations of the rights of peoples
The ninth General Congregation marked the beginning of the second of three weeks of the Special Synod for the Amazon Region, which will end on October 27th. This morning there were 179 Synod Fathers present. Together with the Pope, they prayed for Ecuador.
By Vatican News

The Synod is a Kairos, a time of grace: the Church listens with empathy, and walks alongside the land’s indigenous peoples: those who abide in the geographical and existential peripheries that have received the gift of contemplating the "Let there Be", the first word spoken by God, every day. Creation is a ‘green Bible’ that reveals the Creator, and in the celebration of the Sacraments, commitment towards the environment finds its deepest foundation.

Ongoing formation and catechumenate for a Church that goes forth
In view of the significant decrease in the number of religious communities in the region, as is the case for example in the State of Parà in Brazil, where the presence of constant pastoral care has become limited to visits, religious congregations are asked to revive their missionary enthusiasm. At the same time it is necessary to offer constant formation and catechumenate ways based not only on books, but on grass-roots experience in direct contact with local culture. To take on an Amazonian face means to understand the signs and symbols of these peoples, and to live together in a perspective of dialogue and interculturality, encouraging the deepening of an Indios theology so that the liturgy may increasingly respond to local culture. This implies a dynamism: that is the capacity to go beyond our structures and perspectives. In some cases an outgoing Church is already a reality in the Amazon.  There are many examples of pastoral presence that aim to encourage indigenous peoples, who are forgotten by the world, to take their fate into their own hands. Never, however, must we yield to the temptation of an evangelization based exclusively on aid programmes. At the same time the Church is called to face the challenges posed on one hand by the proliferation of religious sects, and on the other by a relativistic culture perpetrated by industrialized countries.

Contribution in an international context
The Church is called to make its voice heard.  Some have said that Pontifical representations could continue to play an essential role in Governments and International Bodies in order to promote the demands of the peoples of the Amazon regarding their rights for land, water and forests. In addition, the Church in the Amazon is called upon to promote a circular economy that respects local wisdom and practices. The creation of an international ecclesial observatory on the violation of the human rights of the Amazon peoples has also been called for. Thus the exhortation: industrialized countries should express greater solidarity towards countries with fragile economies, also because they produce higher rates of pollution. Thanks to the multiplicity of interventions and ideas expressed in the Synod Hall, the Synod is strengthening in the participants the idea of a Church that is united around the challenges of the Pan-Amazon region. Every region in the world feels the Amazon is its own and the fruits of this special assembly will benefit the Universal Church.

Communication favours interconnectivity
The Amazon is a multiethnic, multicultural and multi-religious world where many seeds of the Word have already taken root and are bearing fruit. It is desirable to create an ecosystem of pan-Amazonian ecclesial communication that reflects the interconnectivity of humanity. The idea is to weave not so much a network of cables as a network of human persons. The great difficulties of mobility in the boundless region in fact urgently demand greater effectiveness and widespread reach of the means of social communications. At the same time, it is necessary to help people have a critical reading of the information diffused in a superficial way by some media, unmasking all forms of manipulation, distortion or spectacularization.

Ministries and discernment
Presence is essential. Not only of priests and bishops, but also of lay collaborators, men and women.  A pastoral leader - be he or she a catechist, a lector, someone who ministers to the sick, a deacon, or an extraordinary minister of the Eucharist - exercises his or her baptismal priesthood when he or she assumes an attitude of service and not of power or dominion. Women are precious collaborators in the mission of the Church in the Amazon, they are irreplaceable in  Samaritan care, in the custody and protection of life. At the same time, in the field of education, the need  to transmit the faith,  to motivate young people to build their own life projects, to promote the care for our Common Home, to raise awareness about the scourge of human trafficking, to combat illiteracy and school dropout, are all issues that were highlighted. Young people must be helped to integrate ancestral and modern knowledge in order to allow both to contribute to "good living". Under the action of the Spirit, “cum Petrus and sub Petrus”, the Church is therefore urged to convert to an Amazonian perspective and to undertake, without fear, discernment and reflection on the theme of priesthood, also listening to the hypothesis of ordaining married persons, without ever watering down the value of celibacy. In fact, we must always keep in mind the tragedy of those populations who cannot celebrate the Eucharist because of the lack of priests or who receive the Body of Christ only once or twice a year. A reflection was suggested regarding the possible updating of Paul VI’s Apostolic Letter Ministeria Quaedam. The introduction of permanent indigenous deacons and of deacons, who, through the ministry of the Word, will help the local people to better understand the Sacred Texts, was also proposed.

Protection of our Common Home and irresponsible exploitation
The idea was put forward to create eco-intercultural Christian communities that are open to inter-institutional and interreligious dialogue and that teach new lifestyles aimed towards the care for our common home. Oil and logging companies - it has been denounced - damage the environment and undermine the existence of peoples. In fact, indigenous people do not derive any profit from the extractive industry or from the logging of forests. It is therefore necessary to strongly expose the rampant corruption that feeds inequalities and injustice and to ask ourselves what is it we will leave to future generations. The great threat posed by drug trafficking must also be tackled, together with all that fuels it.

Access to food and respect for ecosystems
Room was also given to the issue of food sovereignty: every people has the right to choose what to cultivate, what to eat and how to guarantee access to food while respecting ecosystems. A significant part of the agro-food biodiversity in the Amazon is still unknown and has been preserved so far by local populations. The appeal was issued that this is not something that must end up being exploited by few and taken away from the multitude, as has happened on the medical front, where plants and active ingredients have enriched multinational pharmaceutical companies, and nothing has been given in return to the people.
Full Text Source : VaticanNews.va - Image source Screenshot - Vatican Media
Posted by Jesus Caritas Est at 10:17 AM