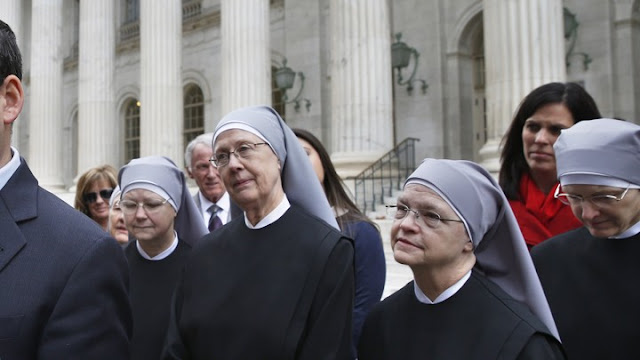 LifeNews reports that a traditionally liberal federal appeals court has ruled once again that the Little Sisters of the Poor have to pay for abortions under their health insurance plan under the Obamacare mandate.
Over the past three years the Supreme Court has twice protected the Catholic nuns, but pro-abortion state officials have filed new lawsuits trying to force the Catholic order to pay for abortions in their health care plan. Today, a 3-judge panel of the U.S. Court of Appeals for the 9th Circuit issued a decision.

The panel’s ruling invalidated the new pro-life rules the Trump administration put in place to protect the Catholic nuns and others from being forced to fund abortions.
In May 2016, the Supreme Court unanimously overturned lower court rulings against the Little Sisters and granted them an exemption from the Obama HHS mandate, which required the nuns to fund abortion pills in their health care plans or pay millions of dollars in fines. In 2018, the Trump administration announced a new rule protecting religious non-profits, including the Little Sisters, but several states, including Pennsylvania and California, immediately sued the federal government to take that protection away, forcing the Little Sisters back to court.
The 9th Circuit panel ruled on the California case today:

“The panel held that the religious exemption contradicts congressional intent that all women have access to appropriate preventative care and the exemption operates in a manner fully at odds with the careful, individualized, and searching review mandated by the Religious Freedom Restoration Act,” Judge J. Clifford Wallace wrote for the majority.
California Attorney General Xavier Becerra led 13 other state attorneys general in a lawsuit against the administration challenging the exemptions.
“Today will serve as a reminder to the Trump Administration that politicians and employers certainly have no business interfering with women’s reproductive healthcare,” Becerra said in a statement.
Senior Circuit Judge Andrew Kleinfeld, a George H.W. Bush appointee who leans conservative, penned a dissent, arguing that the case has more to do with states looking to save money than it has to do with women’s health care. He added that the decision is redundant because a judge in Pennsylvania has already halted the administration’s birth control exceptions.
“The casual reader may imagine that the dispute is about provision of contraception and abortion services to women. It is not.” Kleinfeld wrote. “No woman sued for an injunction in this case, and no affidavits have been submitted from any women establishing any question in this case about whether they will be deprived of reproductive services or harmed in any way by the modification of the regulation. This case is a claim by several states to prevent a modification of a regulation from going into effect, claiming that it will cost them money.”

In 2016, the government admitted, before the Supreme Court, that it has ways to get abortion-causing drugs to women without forcing the Little Sisters of the Poor to participate. In fact, California and Pennsylvania each have programs for providing tax-funded abortions to women who want them. Yet these States sued to enforce the federal mandate on religious non-profits like the Little Sisters.
During the Faith & Freedom Coalition conference in Washington this year, President Donald Trump defended the conscience rights of pro-life doctors and nurses. He also stood up for the Little Sisters of the Poor, the group of Catholic nuns that is still fighting in court against being forced to pay for abortion-causing drugs.
“My administration has taken historic action to protect religious liberty. We’re protecting the conscience rights of doctors and nurses and teachers and groups like the Little Sisters of the Poor. We’re with them,” Trump told the audience of hundreds of Christian voters.
Edited and Shortened from a report by LifeNews.com - Image Source: Google Images
Posted by Jesus Caritas Est at 9:07 AM