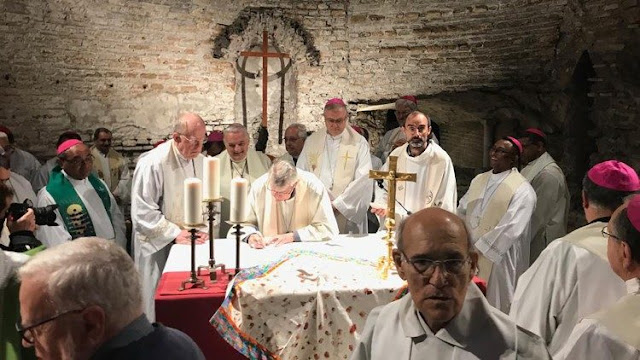 A group of Synod Fathers renews the “Pact of the Catacombs”
Following in the footsteps of some of the Council Fathers in 1965, a group of participants in the Synod on the Amazon goes to the Catacombs of Domitilla to reaffirm the preferential option for the poor.
By Vatican News

On 16 November 1965, just a few days before the closing of the Second Vatican Council, forty-two Council Fathers celebrated Mass in the Catacombs of Domitilla, to ask God for the grace “to be faithful to the spirit of Jesus” in the service of the poor. After the celebration of the liturgy, they signed the “Catacombs’ Pact of the Poor and Servant Church”. Later, more than 500 Council Fathers added their names to the pact.

Following in the footsteps of the Council Fathers, tracing out new paths
More than 50 years later, the legacy of those Council Fathers was taken up by a group of participants in the Synod of Bishops for the Pan-Amazon region, which is focused on the theme “New paths for the Church and for an integral ecology”. Cardinal Claudio Hummes, the General relator for the Synod, presided at Mass in the catacombs, after which the Synod Fathers present signed a new “Pact of the Catacombs for the Common Home. For a Church with an Amazonian face, poor and servant, prophetic and Samaritan”.

Cardinal Hummes: the Synod is a conciliar fruit
In his homily, Cardinal Hummes recalled that the Catacombs were ancient cemeteries where Christians buried their martyrs: "This", he said, "is truly holy ground". This place, he added, reminds us of the early times of the Church: difficult times, marked by persecution but also by much faith. The Church, Cardinal Hummes said, "must always return to its roots here and in Jerusalem".

The Synod, the Cardinal then affirmed, is a fruit of the Second Vatican Council. New ways are being sought to carry out the mission of proclaiming the Word. The great evils of the world, he then stressed, are due to the money that feeds corruption, conflict, lies. The Church, Cardinal Hummes concluded, must always be "praying".
The Pact of the Catacombs for the Common Home
In the document signed on Sunday, the participants of the Synod on the Amazon recall that they share the joy of living among many indigenous peoples, inhabitants of river banks, migrants and suburban communities. With them, they experienced “the power of the Gospel that works in the smallest”. “The encounter with these peoples”, the document says, “challenges us and invites us to a simpler life of sharing and gratuitousness”. The signatories of the document commit themselves to “renewing the preferential option for the poor”, to abandoning “every type of colonist mentality and posture” and to proclaiming “the liberating novelty of the Gospel of Jesus Christ”. They also undertake to recognize “the ecclesial ministries already existing in the communities” and to seek “new paths of pastoral action”.

Other commitments in the "Pact of the Catacombs for the Common Home" include pledges "to walk ecumenically with other Christian communities" and "to assume before the avalanche of consumerism a happily sober lifestyle". The signatory fathers also promise to recognize "the ecclesial ministries that already exist in the communities" and to seek "new paths of pastoral action".
"Aware of our frailty, of our poverty and smallness in the face of such great and serious challenges", the signers state, "we commit ourselves to the prayer of the Church".
Full Text + Image Source: VaticanNews.va
Posted by Jesus Caritas Est at 9:43 AM