Pope Francis at Concluding Mass for Amazon Synod says "Let us pray for the grace to be able to listen to the cry of the poor.." Full Text + Video 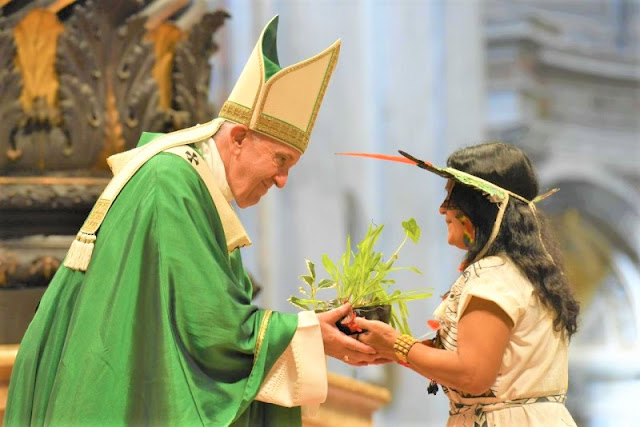 The word of God today helps us to pray through three figures: in Jesus’ parable both the Pharisee and the tax collector pray, while the first reading speaks of the prayer of a poor person.
1. The prayer of the Pharisee begins in this way: “God, I thank you”.
This is a great beginning, because the best prayer is that of gratitude, that of praise. Immediately, though, we see the reason why he gives thanks: “that I am not like other men” (Lk 18:11). He also explains the reason: he fasts twice a week, although at the time there was only a yearly obligation; he pays tithes on all that he has, though tithing was prescribed only on the most important products (cf. Dt 14:22ff). In short, he boasts because he fulfils particular commandments to the best degree possible. But he forgets the greatest commandment: to love God and our neighbour (cf. Mt 22:36-40). Brimming with self-assurance about his own ability to keep the commandments, his own merits and virtues, he is focused only on himself. The tragedy of this man is that he is without love. Even the best things, without love, count for nothing, as Saint Paul says (cf. 1 Cor 13). Without love, what is the result? He ends up praising himself instead of praying. In fact, he asks nothing from the Lord because he does not feel needy or in debt, but he feels that God owes something to him. He stands in the temple of God, but he worships a different god: himself. And many “prestigious” groups, “Catholic Christians”, go along this path.