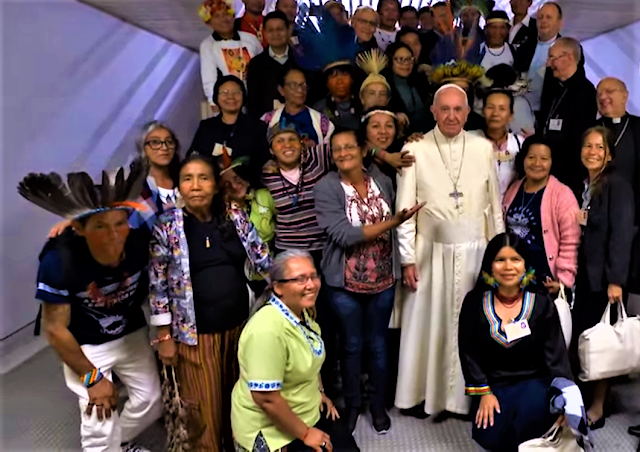 According to Vatican News, Pope Francis met with a group of indigenous people participating in the Synod for the Pan-Amazon Region.

On Thursday, October 17, 2019, around 3.30pm, Pope Francis met with about 40 indigenous people, some of them participants at the Synod for the Amazon, others engaged in cultural activities currently underway in Rome. The group was accompanied by Brazilian Cardinal Claudio Hummes, and Archbishop Roque Paloschi of Porto Velho, Brazil.
According to a statement by the Director of the Holy See Press Office, Matteo Bruni, the meeting opened with two brief speeches, read by a woman and a man, representing the indigenous people. “They expressed their gratitude to the Holy Father for convoking the Synod, and asked for help in implementing their desire to ensure a peaceful and happy life for their peoples, caring for their land, and protecting its waters, for their descendants to enjoy”.

Pope Francis then addressed a few words to those present, underlining how the Gospel is like a seed, which falls onto the soil it finds, and grows with the characteristics of that soil. With reference to the Amazon Region, continues the Vatican Press Office statement, “the Holy Father pointed out the dangers of new forms of colonization”.

Finally, referring to the origins of Christianity, which was born in the Jewish world, developed in the Greek-Latin world, and then reached other lands, Slavic, Eastern, and American, Pope Francis reiterated the need to inculturate the Gospel so that “people can receive the announcement of Jesus with their own culture”.Edited from VaticanNews.va
Posted by Jesus Caritas Est at 2:44 PM