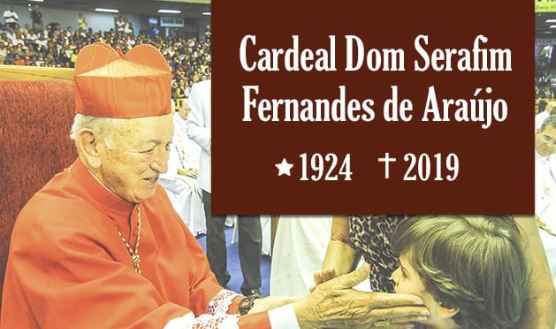 Pope sends telegram for death of Cardinal Serafim Fernandes de Araújo
In a telegram, Pope Francis expresses his sadness at the passing of the Archbishop Emeritus of Belo Horizonte in Brazil, who died on Tuesday morning at the age of 95.
By Vatican News

In the telegram, addressed to Archbishop Walmor Oliveira de Azevedo, President of the Brazilian Bishops Conference, Pope Francis expresses his closeness in prayer to the relatives of Cardinal de Araújo, and to all the faithful in "this moment of mourning".

The Pope entrusts the Cardinal to the mercy of God and emphasizes the "zeal" with which he "served the Church" as a priest at the Second Vatican Council, and during the fifty years spent in his Brazilian Archdiocese where, with "missionary passion, he helped increase the love for Jesus Christ and His Church in the hearts of the faithful”.

"May God welcome into eternal happiness this good and faithful servant", prays the Pope, while extending his Apostolic Blessing to the "Archdiocesan community, to the Church of Brazil, and to those who share this moment of sadness".

A man of many talents


Cardinal Serafim Fernandes de Araújo was born on August 13, 1924, in Minas Novas, in the Brazilian state of Alto Jequitinhonha. He lived his childhood in Itamarandiba, also in the Jequitinhonha region, and at the age of 12 he began to study at the Diamantina Seminary, where he graduated in Humanities and in Philosophy.

He was chosen to study in Rome, where he obtained a Masters in Theology and Canon Law from the Pontifical Gregorian University. His priestly ordination took place on March 12, 1949, at the Cathedral of St. John Lateran in Rome.

Cardinal de Araújo returned to Brazil in 1951 and began his priestly activity as parish priest in the city of Gouveia where he remained until 1957.

During this same period he served as chaplain of the Companhia Industrial de São Roberto. From 1956 to 1957 he assumed the position of military chaplain of the 3rd Military Battalion of the Military Police of Minas Gerais. He was also director of Religious Education of the Archdiocese of Diamantina and professor of Canon Law at the Provincial Seminary. In Curvelo, where he was parish priest in 1957 and canon from 1958 to 1959, he also acted as a teacher in several schools.

Commitment to education and communication


Cardinal de Araújo was deeply committed to education and social communications. In 1960, he was appointed the Rector at the Catholic University of Belo Horizonte and for several years he was in charge of a daily radio programme, "A Palavra de Deus", broadcast by Rádio América and of a Sunday TV programme.

He was created a Cardinal by Pope Saint John Paul II in the Consistory of 21 February 1998. From 2004, he was Archbishop Emeritus of Belo Horizonte in Brazil.
Full Text Release from VaticanNews.va - Image Source: OFM.org.br - Google Images