RIP Fr. Bob Bedard - Remembering the Founder of the Companions of the Cross who Died in 2011 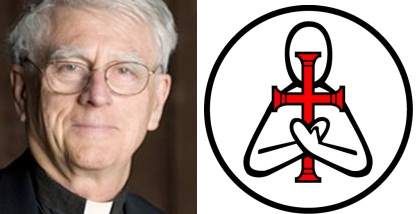 Fr. Bob Bedard (1929-2011) was the Founder of the Companions of the Cross.
On October 6, 2011, Fr. Bob passed away peacefully surrounded by his Companions of the Cross family. Fr. Bedard was born on July 17, 1929 in Ottawa the only child to parents Eileen (Starrs) and Henry “Harry” Bedard.
He came from humble beginnings in Ottawa where he was raised, went to school and was ordained a priest in 1955. He was a high school teacher for many years. Through his involvement in the Charismatic Renewal, the Lord transformed his ministry to his students and as a result many were evangelized and returned to their faith. His extensive speaking at conferences about the renewal of parishes had a tremendous impact and helped numerous people allow the Holy Spirit to be active in their lives. His open and surrendered approach to his faith throughout his life enabled him to say “yes”, when the Lord asked for his permission to begin a new community of priests and seminarians in 1985.
Fr. Bob Bedard, CC was a truly remarkable man of God.
Convinced of the infinite love of God, the active Presence of the Risen Lord Jesus Christ, and the power of the Holy Spirit, he yearned wholeheartedly to extend the Kingdom of God.  As a much loved high school principal, teacher, and basketball coach, he brought many young people into fervent commitment to the faith. As a fiery preacher and pioneer of the New Evangelization and the Marian movement he influenced the lives of untold numbers of people. Known for his call to radical surrender to the Lord, he sought to help renew the Church and make it always fully Catholic, imbued with an Evangelical heart, and filled with Pentecostal fire.
In 1985 he founded the Companions of the Cross to provide a supportive fraternal life for priests and to extend the mission of evangelization. He is fondly remembered for his unparalleled passion for the Lord, his gentle fatherly care, and incredible sense of humour. Many embrace him as their ‘spiritual Father in Christ’, including the Companions of the Cross, the Servants of the Cross (our associated sisterhood), and our many Lay Associates.

June, 2003: Sr. Anna Chan answers the call to incarnate the spirituality of the Companions of the Cross into a community of women called the Servants of the Cross
Many people who did not have the opportunity to know Fr. Bob personally have come to know him and his spirituality through his books, articles, talks, and the testimony of others. We invite you to get to know and love our founder – as his life was completely devoted to knowing and loving Christ.
Edited from Source: https://www.companionscross.org/our-founder