Saint October 27 : St. Frumentius - Known as Abuna - a Bishop and Patron of #Ethiopia 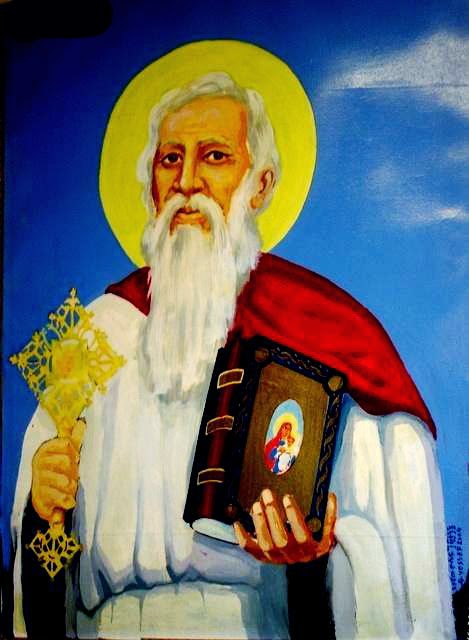 Saint Frumentius, Amharic Abba Salama (flourished 4th century, feast day October 27 in the Roman Catholic Church; November 30 in Eastern Orthodox churches; December 18th in the Coptic Church), Syrian apostle who introduced Christianity into Ethiopia. As first bishop of its ancient capital, Aksum, he structured the emerging Christian church there in the orthodox theology of the Alexandrian school during the 4th-century controversy over Arianism. A student of philosophy from Tyre, Frumentius and a colleague, Aedesius, were captured by Ethiopians in about 340. They became civil servants at the court of the Aksumite king Ezana, whom Frumentius converted. On the death of the monarch, Frumentius became the royal administrator and tutor to the crown prince and was empowered to grant freedom of religious expression to visiting Christian merchants from the Roman Empire. After fulfilling his regency Frumentius visited Athanasius, bishop of Alexandria, in about 347. Athanasius ordained Frumentius bishop and commissioned him to initiate the cultural adaptation of Greek Christianity’s biblical-liturgical texts to Ethiopic symbols and language. The link between the Egyptian Coptic and Ethiopian churches having thus been established, Frumentius, despite the enmity of the Byzantine Roman emperor Constantius II (337–361), repudiated the Arians. The 4th-century church historian Rufinus of Aquileia, by meeting Aedesius later at Tyre, was able to document Frumentius’ achievements, noting that the Ethiopians addressed him as abuna, or “Our Father,” a title that is still used for the patriarch of the Ethiopian Orthodox Church.SOURCE Encyclopedia Britannica
Image Google
Posted by Jesus Caritas Est at 9:13 PM