World Food Day Message of Pope Francis "... realize that we are accumulating and wasting is the bread of the poor." Full Text 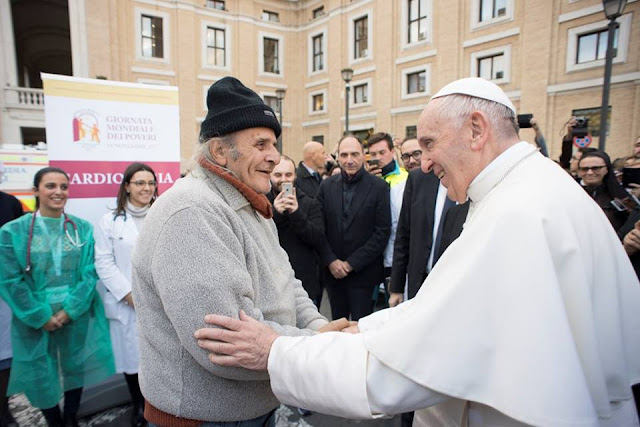 To His Excellency Qu Dongyu
FAO Director-General
The yearly celebration of World Food Day makes us hear the dramatic plea of those of our brothers and sisters who suffer from hunger and malnutrition. Despite efforts made in recent decades, the 2030 Agenda for Sustainable Development is yet to be implemented in many parts of the world. As a way of responding to this plea of our brothers and sisters, the theme chosen by FAO this year – “Our Actions Are Our Future. Healthy Diets for a #ZeroHunger World” – points to the distorted relationship between food and nutrition.
We are in fact witnessing how food is ceasing to be a means of subsistence and turning into an avenue of personal destruction. 820 million of the world’s people suffer from hunger, while almost 700 million are overweight, victims of improper dietary habits. The latter are no longer simply a by-product of the diet enjoyed by “peoples blessed with abundance” (cf. Paul VI, Encyclical Letter Populorum Progressio, 3); they are now found in poorer countries too, where they eat little but increasingly poorly, since they imitate dietary models imported from developed areas. Due to poor nutrition, pathologies arise not only from the imbalance caused by “excess”, often resulting in diabetes, cardiovascular diseases and other forms of degenerative diseases, but also by “deficiency”, as documented by an increasing number of deaths from anorexia and bulimia.

This reality calls for a conversion in our way of living and acting, and nutrition represents an important starting point. Our lives depend on the fruits of creation (cf. Ps 65:10-14; 104:27-28); these cannot be reduced to mere objects to be recklessly handled and used. Nutritional disorders can only be combatted by the cultivation of lifestyles inspired by gratitude for the gifts we have received and the adoption of a spirit of temperance, moderation, abstinence, self-control and solidarity. These virtues, which have accompanied the history of humanity, summon us to a more simple and sober life, and unfailing concern for the needs of those around us. By adopting such a lifestyle, we will grow in a fraternal solidarity that seeks the common good and avoids the individualism and egocentrism that serve only to generate hunger and social inequality. Such a lifestyle will enable us to cultivate a healthy relationship with ourselves, with our brothers and sisters, and with the environment in which we live.
Here the family has a primary role to play; for this reason, FAO has devoted special attention to protecting rural families and promoting family farming. Within the family, and thanks to the particular sensitivity and wisdom of women and mothers, we learn how to enjoy the fruits of the earth without abusing it. We also discover the most effective means for spreading lifestyles respectful of our personal and collective good.
At the same time, the increasing interdependence of nations can help to set aside special interests, while fostering trust and relationships of friendship between peoples (cf. Compendium of the Social Doctrine of the Church, 482). It is my hope that this year’s theme will remind us that many continue to eat in an unhealthy way. It is a cruel, unjust and paradoxical reality that, today, there is food for everyone and yet not everyone has access to it, and that in some areas of the world food is wasted, discarded and consumed in excess, or destined for other purposes than nutrition. To escape from this spiral, we need to promote “economic institutions and social initiatives which can give the poor regular access to basic resources” (Laudato Si’, 109).
The battle against hunger and malnutrition will not end as long as the logic of the market prevails and profit is sought at any cost, with the result that food is relegated to a mere commercial product subject to financial speculation and with little regard for its cultural, social and indeed symbolic importance. Our first concern should always be the human person: concrete men, women and children, especially those who lack daily food and have a limited ability to manage family and social relationships (cf. Laudato Si’, 112-113). When priority is given to the human person, humanitarian aid operations and development programs will surely have a greater impact and will yield the expected results. We must come to realize that we are accumulating and wasting is the bread of the poor.
Mr Director General, in offering you these reflections for the celebration of World Food Day, I pray that God may bless all associated with the work of FAO and prosper your efforts to promote peace by serving the authentic and integral development of the whole human family.
From the Vatican, 16 October 2019
Francis
Full Text Source: Vatican.va - Official Tranlsation - Image shared from Vatican.va
Posted by Jesus Caritas Est at 11:38 AM