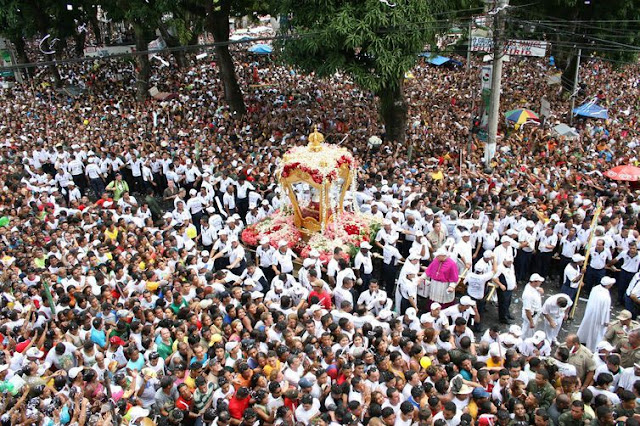 The largest religious festival in Brazil was conducted this year by the papal nuncio D'Aniello
Brazil. One of the largest pilgrimages of the Catholic Church, the "Círio de Nazare" in Belem, has gathered hundreds of thousands of pilgrims in the city on the Amazon on Sunday. More than two million faithful participated in the four-kilometer procession from the Cathedral to St. Mary's Basilica. The theme of this year's pilgrimage was Mary, Mother of the Church. Archbishop Giovanni D'Aniello, especially as Belem's Archbishop Alberto Taveira currently participates in the Amazon Synod in Rome.

The "Cirio" procession is a "moment of grace" that allows the believing in the presence of God through his mother to Mary and help them to find their way to Jesus Christ, said Nuncio D'Aniello in his sermon. The Archbishop invited us to imitate the Mother of Jesus as a "model of simplicity, modesty and prayer life" and "to love God in our neighbor and in the most needy people".
The procession in honor of Saint Mary in Belem has been held on the second Sunday of October since 1790 and is considered the largest religious festival in Brazil. After a festive service celebrated in the early morning hours, a statue of the Virgin Mary is being carried on a litter through the streets and finally ships in the bay across the bay. Attached to the statue is a 400-meter long rope that the faithful try to touch. Para State Patronage Festival 2013 was included in the UNESCO Representative List of Intangible Cultural Heritage of Humanity.
Edited from Kath.net
Posted by Jesus Caritas Est at 9:45 AM