Wow over 50,000 at March for Life in Slovakia - with many Youth and sponsorship by Kanet and the Catholic Bishops' Conference 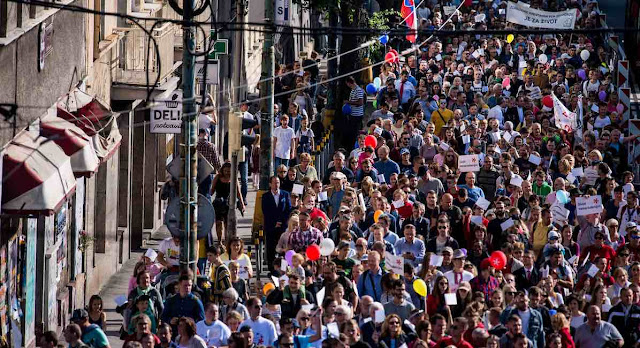 The march was organised by the Catholic Bishops’ Conference of Slovakia and non-governmental organisation, Kanet.  The event was heavily promoted in churches around the country ensuring a massive turnout. Organisers stated that they were marching with the aim of achieving ‘societal and legislative protection of the life of every human from conception until natural death’.
Protesters gathered in the streets of Bratislava ahead of parliamentary debate on abortion restriction scheduled this month, Reuters reported.

The crowd carried signs with the slogans “A human is human regardless of size” and “Who kills an unborn child kills the future of the nation?" according to the news service.
The central European country currently allows abortions up to 12 weeks of pregnancy or 24 weeks if there is a health problem.
Lawmakers in the mainly Catholic nation, want to make abortions illegal -- even in cases of rape or if there is a health complication -- or legal until six or eight weeks into the pregnancy.
Parliament will discuss the proposed abortion limits, according to Reuters.
The event marked the third national pro-life march in Slovakia. The country’s first national march which was held in 2013 saw 80,000 Slovaks in attendance, with another estimated turnout of 80,000 two years later at the 2015 march. The attendance has been described as ‘massive by Slovak standards’, as the country has a current population of just over 5 million.

The event concluded with the unveiling of a memorial plaque to commemorate the 1.4 million people "who were not allowed to be born" because of the 60 years of legalised abortions in the state (then Czechoslovakia). Slovakia’s abortion numbers have continued to decline in recent years and are now only half that found in Scotland which has a similar population.
Reuters reported that a recent survey found 34.6 percent of the respondents in Slovakia supported limiting abortion accessibility, while 55.5 percent oppose it. Within the past decade abortions in Slovakia as a whole have almost been cut in half.
With information from https://www.spuc.org.uk

Excellent news event! Thanks for the good news.
We pray for more young people to actively live & advocate Pro Life. May God lead our future leaders as our hope for a better future.