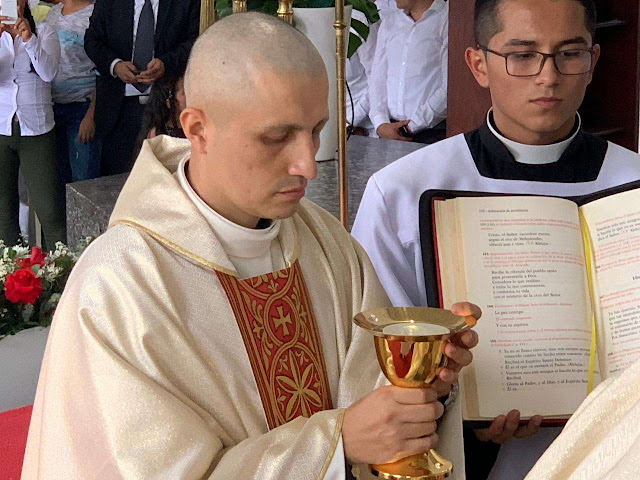 * «It was the most beautiful thing that happened to me, not because they called me to be a priest, which in itself is a lot of joy, but because the disease helped me discover the love of Jesus Christ. He has manifested his work in me and also wants it for the lives of others. I am in God's hands and if things become very serious for me, I have begged you to fill me with strength to take on the pain with much love, although my pains have been small in front of people who have really suffered. I want to die with the chasuble on, because dying as a priest is worth everything, just like Polish father Michel Los died. I feel happy that the will of Jesus Christ is done, no matter if it is after the ordination or later, if God gives me a little more time »

He is in the final phase of his disease, a nasopharyngeal cancer.

Although he had been moved by the pontiff's decision to allow the seminarian Michel Los to become a priest on his sickbed at the Warsaw Military Hospital, last May, this 23-year-old seminarian never imagined that a few months later he would receive a similar news.
Diego Omar is aware that his case - like Michel's - is a “world news”, although every time he insists he never tires of saying that he does not want recognition Personal: “I never asked for ordination… it was God who wanted it for me. It is He in his infinite goodness who has manifested in this way. ”


When he was 16 years old and was a young man who went out to dance, had friends, played football, almost never went to mass and traveled the streets of his town, Saladoblanco (department of Huila, in southern Colombia). . At that time he decided to return to the church where on Sunday he felt that during the Eucharist he "had been healed." From that moment - Peña Navia tells the journalist Humberto Sosa in the “Focus” program of the San.TV Channel - “my priestly vocation was born and I decided to surrender to the Lord”. Diego Omar entered the Conciliar María Inmaculada de Garzón Seminar on February 1, 2015 and is currently in the third year of Philosophy.

Shortly after, on February 1, 2015 he entered the Diocesan Seminary of Mary Immaculate, in Garzón, where he already recovered began his studies to become a priest and follow in the footsteps of José Ervin, his older brother. Diego Omar is currently in the third year of Philosophy. For four years, the seminarian fully complied with the demanding academic program of one of the most prestigious seminars in Colombia, but again, cancer attacked him this year 2019 with such fierceness that he had to divide his time between studies, trips to Bogotá, consultations with dozens of specialists, strenuous examinations and a terrible diagnosis: the disease had advanced and had to prepare for the worst.

Even so, it remains attached to God, to prayers and to the divine will. Diego Omar says it calmly and without drama: “It has been the most beautiful thing that has happened to me, not because they called me to be a priest, which in itself is a lot of joy, but because the disease helped me discover the love of Jesus Christ . He has manifested his work in me and also wants it for the lives of others. ”


The future priest affirms that he is not afraid of death, but of the pain and physical suffering he may feel as a result of the final attack of the disease and the ineffectiveness of medications. “If death came at this time and I was in the presence of Jesus Christ, that would make me very happy, although I know that I am a great sinner and that I am not yet modeled as God would like, for example, as a great saint, type the priest de Ars ”, emphasizes the Colombian seminarian.

Edited from Source: https://caminocatolico.com
Posted by Jesus Caritas Est at 6:40 AM