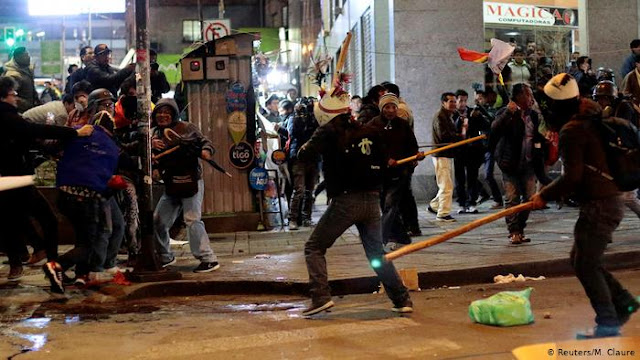 AMERICA/BOLIVIA - Set aside sectoral interests: Bishops and UN representative call for an end to violence
Friday, 8 November 2019
Santa Cruz (Agenzia Fides) - The Archbishop of Santa Cruz, Mgr. Sergio Gualberti, and the Archbishop of Cochabamba, Oscar Omar Aparicio, together with their Auxiliaries, have invited to establish a sincere dialogue between political, civil and citizen protagonists, as the only way to authentic peace. To do this, sectoral interests should be set aside. The Archbishop of Santa Cruz, who had recently returned home from the Synod of Bishops held in Rome, said this yesterday evening in a meeting with media operators.
Mgr. Sergio Gualberti, according to information sent to Fides, expressed concern and uncertainty about the unpredictable consequences that the political crisis can bring to Bolivia. In these days in which the general strike continues, three people have died, two in Montero and the third in Cochabamba, in addition to numerous injuries in clashes between supporters of MAS (the party of President Morales) and the population who protest.
"My solidarity with the victims and fraternal closeness to their relatives", said Mgr. Gualberti, who asked the authorities to listen to the cry of the people from all corners of the country, and to recognize the great sacrifice of the people who are on strike, especially those who believe in democracy.
Communication of the electoral result by the Supreme Electoral Court (TSE), with the victory of outgoing president Morales (see Fides, 4/11/2019), followed by days of strong protests and violent clashes that caused 3 deaths. According to agency information, there were new clashes in La Paz last night that left many wounded, both protesters and policemen.
The United Nations Organization in Bolivia has published a note that "strongly condemns the death of a third victim of intolerance and violence that continues in the country, as well as of the more than 300 people injured so far, according to data from the Office of Ombudsman", stressing that "nothing justifies the clash between Bolivians, and the death of citizens is absolutely inconceivable".
The United Nations representation "expresses profound dismay and indignation at the high levels of violence registered", the note continues, and "reminds the competent authorities that it is their duty to guarantee the respect, protection and guarantee of the human rights of all Bolivians "and urges them to "act preventively in the face of any act of violence". The UN representation in Bolivia calls on all political actors "to immediately reduce political tensions and totally condemn any violent demonstration that could endanger people's integrity and life". Finally "it reaffirms the absolute rejection of any form of violence and launches an appeal to dialogue as the only way to avoid further deaths and restore peace". (CE) (Agenzia Fides, 8/11/2019)
Image Source: Google Images - DW