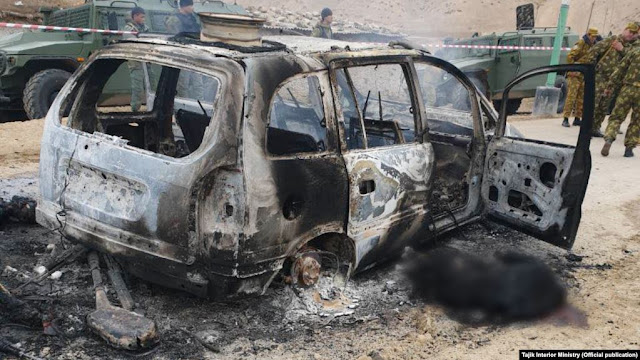 Seventeen die in Islamic State attack on border checkpoint
Both security officials and attackers die in the incident as IS fighters tried to enter from Afghanistan. Today is Tajikistan’s Constitution Day. The country has been marked by bitter social conflicts. At least 1,000 young people are said to have joined the fight in Syria and Iraq.

Dushanbe (AsiaNews/Agencies) – Islamic State (IS) fighters attacked this morning a checkpoint in Tajikistan, on the border with Uzbekistan, Tajikistan’s National Security Committee (NSC) has announced.

A policeman and a border guard were killed in the incident along with 15 attackers. Four other fighters, who had fled the scene, were eventually captured.

The attack began around 3.30 am (local time) at a post about 60 kilometres southwest of the capital, in the Rudaki district. No one has yet claimed responsibility.

Some experts believe the attack was meant to scuttle a recent agreement signed by Tajikistan and Uzbekistan to settle a border dispute. It took place on Tajikistan’s Constitution Day whilst Tajikistani President Emomali Rakhmon was on an official visit to Europe (Paris, Bern, Prague).

Located in Central Asia, Tajikistan is a poor country of nine million people, 97 per cent Muslim, that became independent following the collapse of the Soviet Union.

With a mostly mountainous terrain, its economy is principally based on aluminium production, cotton and the remittances of Tajik workers abroad.

Since it gained independence in 1991, the country has been marked by bitter conflicts. Tens of thousands of people died in five years of civil war (1992-1997) between rebel groups (some Islamic oriented) and the government.

In Tajikistan as in all other former Soviet republics in Central Asia, Islamic extremism has developed among the young in recent years.

According to the government, at least a thousand Tajikistanis have left the country to join the Islamic State in Syria and Iraq.