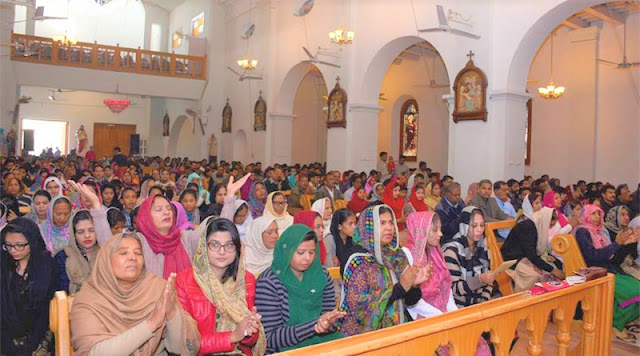 Punjab, a Muslims mob destroys a Catholic church
by Shafique Khokhar
The police witnessed the demolition and did not intervene. The place of Christian worship was built in 2007 and stands on land donated by a Catholic. Muslims dispute the lack of necessary permits. Catechist: "They do not want the church to exist".


Lahore (AsiaNews) - A mob of Muslim radicals demolished a wall and the front door of a Catholic church in the village of Waqya Chak, district of Arifwala, in the Pakistani Punjab. The destruction took place on November 4th under the eyes of the police.

The official reason for the destruction is that the Christian community did not have the necessary permits. Speaking to AsiaNews, however, Catholics complain that it is the fruit of "envy" against Christians. Naseer Masih, a church catechist, declares: "Muslims do not want the church in the village because they have bad feelings towards Christians".

About 4 thousand people live in the village. There are 70 Catholic families, and now they live with pain and anger. Naseer has been leading prayers since the place of worship was built in 2007. This is not a real building, given that the resident Catholic community does not have the funds to build a church, but a small fenced plot, given by a member of the community. Inside there is a modest construction where the masses are celebrated and the parish priests of the nearby churches officiate the liturgy on the major Christian feasts.

Muslims oppose the presence of the wall. On 4 November 50 policemen arrived in front of the gate and asked Catholics if they had ever had problems praying in church. Christians have responded that they had never had difficulties. Meanwhile, a crowd of 60 people gathered to bring a tractor and hammers. With the tractor they knocked down the door, then the Muslims completed the destruction with hammers.

The following day police officers - including the assistant commissioner, deputy superintendent and the station attendant - called a meeting between Christians and Muslims. On that occasion the policemen told the Christians that they will not be able to build the church proper until they have the permission of the district coordinator. Then they added that the church was destroyed because it was illegal.

According to Naseer, "the demolition of church property is against the law. Among the other things we had no warning from the police before the accident. The Muslims carried out the destruction and the policemen did nothing against them. This means that they are on their side ”. "We have prepared all the documents - he says - and we will appeal to the district, so that we can finally build the church and that it is registered by the government. Muslims do what they can against us, and the police conspire with them. We hope that the bishop and the priests will support us in presenting the documents".

If the district opposes the registration of the church, he promises, "there is nothing left but to knock on the door of the court. We also ask that those who destroyed the church be punished."
Full Text Source: Asia News IT
Posted by Jesus Caritas Est at 9:15 AM

Why do Muslims attack others of a different faith? What do they fear?