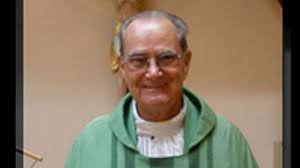 A New York priest named Fr. Tom Connery was killed in flash floods after Halloween storm. Hewas  swept away in flash flooding resulting from a Halloween storm. Father Tom Connery, age 82, was a longtime priest of the Diocese of Albany. He died on Thursday Oct. 31, 2019, according to a statement from New York State Police. Connery was driving through a roadway in the town of Norway.  Connery's 2017 Ford Fusion struggled to make it through, a witness told police, and became stuck after part of the road collapsed on the vehicle.
Fr. Connery got out of the car and tried to walk through the floodwaters to reach the witness, but lost his footing and "was washed downstream," police said. "Due to the dangerously high and strong current, the witness was unable to help Mr. Connery," the statement continued. Crews searched for Connery early Friday after the flood waters had receded. They found his body about a quarter-mile downstream, police said.
The storm battered the Eastern part of the country and brought 5 inches of rain to central New York. It resulted in a flash flood emergency for parts of Herkimer County, where Connery's vehicle became trapped. Connery had been serving as a priest for 56 years, said Bishop Edward B. Scharfenberger. "We are so saddened to learn of Father Thomas Connery’s tragic death, but we know that he died as he lived -- serving the people of God without fear or concern for himself,” the bishop said in a statement to The Evangelist, the publication of the Diocese of Albany.
Edited from ABCNewsGo