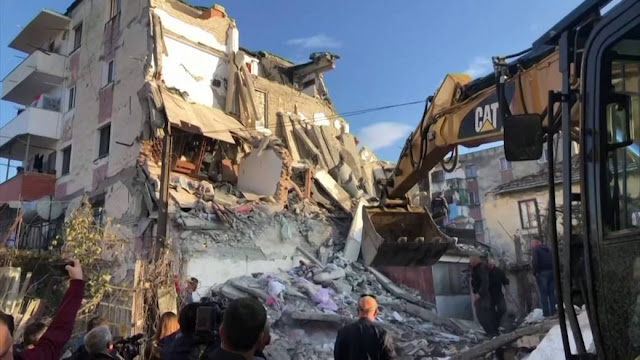 The death toll from the most powerful earthquake to strike Albania in decades rose after 10 more bodies were pulled from the rubble overnight, the defence ministry said.

The magnitude 6.4 earthquake rattled the Balkan state before dawn on Tuesday, levelling buildings and trapping bodies underneath the wreckage in towns near the Adriatic coast.


With the help of experts flown in from across Europe, rescuers have been working tirelessly to clear away the debris of collapsed apartments and hotels in the coastal city of Durres and the town of Thumane, the two areas hardest hit by the earthquake.

Forty-six people have been pulled out alive so far and have been hospitalised, the defence ministry spokeswoman told AFP news agency.

The number of people who may still be buried under the rubble is unknown.

Hundreds of aftershocks have continued to rattle the country, sparking panic and temporarily halting search efforts.

Among some 650 who were injured, at least 10 are seriously wounded, the health ministry said.

Thousands have been displaced, either because their homes were severely damaged or because it is still unsafe to return home because of the aftershocks.
Above Edited from Aljazeera
Vatican News report (excerpt):
Pope Francis's 100,000 euro donation, made through the Dicastery for Promoting Integral Human Development, will be used for a first-phase emergency response. It has been distributed to dioceses affected by the quake for immediate relief and assistance. On Wednesday the Pope prayed for the earthquake victims during his General Audience in St Peter’s Square: “I would like to send a greeting and my closeness to the dear Albanian people, who have suffered so much in these days,” he said, recalling that Albania was the first country in Europe that he chose to visit. “I am close to the victims, I pray for the dead, for the wounded, for the families. May the Lord bless this people whom I love so much," he said. He also sent a telegramme to the President of the nation assuring Albanians of his closeness in prayer and bestowing his blessings upon the emergency personnel in their relief efforts.
Posted by Jesus Caritas Est at 10:19 PM